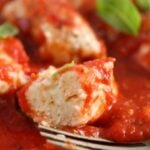 Tender ricotta dumplings or gnudi in a velvety tomato sauce with lots of olive oil and garlic – Italian food at its best.

This ricotta dumplings in tomato sauce are another amazing Italian recipe from Rosa’s beautiful blog For the Love of Italian Cooking. This recipe is the fourth recipe I’ve cooked following Rosa’s recipes. The first one I have ever made was her glorious Tiramisu, I’ve made that dessert lots of times while Rosa was still alive…

The other two I have cooked, after Rosa passed away in March, were Rosa’s Ultimate Homemade Meat Sauce for Pasta or Macerated Strawberries with Sugar and Whipped Cream. If you had a chance to read these last two blog posts, you might know that Rosa, who was a mother of three small children was killed in an act of domestic violence by her own husband. So sad! And even sadder is that this kind of things happen every day somewhere in the world.

According to the World Health Organisation, “almost one third (30%) of women who have been in a relationship report that they have experienced some form of physical and/or sexual violence by their intimate partner in their lifetime”. And “globally, as many as 38% of murders of women are committed by a male intimate partner”.

How to make ricotta dumplings?

There was a time when I used to think that making dumplings was difficult… so I avoided making any kind of dumplings for a long time, the only ones I was making were the semolina dumplings from our favorite Romanian chicken soup.

How to form gnudi?

How long to cook gnudi?

Can you make them in advance?

How to Make Fish Stock and Fish Soup with Salmon Balls 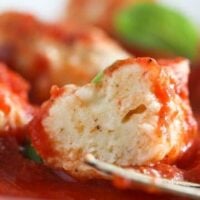 I will be trying these tonight!

i have a new appreciation for ricotta and i've been using it in all kinds of ways lately. i've never tried this but it looks too good to miss!

These gnuddi look amazing! I just made homemade gnocchi for the first time recently, so gnuddi are next on the list!

These gnudi ricotta dumplings are amazing, but I was so sorry to hear of the fate of Rosa. That is so terrible. Your statistics blew my mind. So senseless and it happens all the time. Thanks for all these great tips on tomatoes and sauce and sugar, etc. Very helpful. Also about how much flour to use. Ricotta dumplings sound absolutely divine. xo

When I read your comment that these are usually made with spinach it brought back a childhood memory. I believe that my mother made the spinach version once, but under a totally different name. She had gotten the recipe from a local newspaper, and as I recall instead of a lazy woman making a naked ravioli to avoid making the pasta dough, the story in the Newspaper was that as you say many moons ago, a woman was being told verbally how to make spinach ravioli, by a friend. The woman was not much of a cook and tried to write down what she was being told to do. She made a lot of mistakes in what she wrote down. So instead of spinach ravioli she ended up with spinach and ricotta dumplings which her family liked, and called "Malfatti" which the newspaper translated in English as "Marvelous mistake".

Hi Steve. Thank you for your comment, it made me smile, a nice story. I have heard of Malfatti, but never tried to make them myself. I will definitely keep them in mind, I am sure they are great. :)