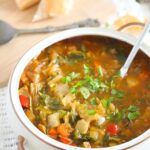 Simplicity at its best: this Spanish vegetable soup is everything you could wish for in a veggie soup. Different sorts of veggies that you can change according to the season, some vegetable broth and a few spices.

Yet the sopa de verduras is full of flavor, comforting, and perfectly satisfying. I love it in spring, summer, autumn, or winter. I change the veggies with the season, use whatever I happen to have in the fridge, I make it with fresh or frozen vegetables or a mixture of the two.

One of my favorite soups together with the Vegetable Meatball Soup, the Romanian Semolina Dumpling Soup or the Bone Broth Vegetable Soup with Beans.

Today’s recipe for Spanish soups is made with:

For a spring version, try adding or replacing some of the veggies with:

For a autumn version, try;

For a winter version, try:

Of course, you can combine any of these veggies at any time of the year.

What can you add? 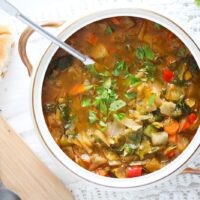