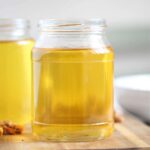 Learn how to render turkey fat and make turkey cracklings. Clean, natural, whole-food, perfect for using in cooking and baking.

Back to the roots. Rendering turkey fat, or chicken, pork lard or beef tallow is easier and healthier than you have been thought to think. Rendered fat is a clean, natural product that has been used for centuries before being vilified by companies producing cheap, unhealthy hydrogenated fats.

I grew up on lard and rendered chicken fat. Butter and oil were difficult to find in the communist 1980s and expensive in the post-communist era in the 1990s in Eastern Europe, so lard was all we had. My grandmother used to render large amounts of pork fat or smaller amounts of chicken fat regularly, she would use it for anything she cooked, for baking and we would eat it on bread (with salt and maybe paprika) almost every day.

Rendering turkey fat is super easy. Just cut the skin into small pieces, heat them gently until they have released all their golden fat, strain, and store.

Rendered fat, lard or schmaltz is low in saturated fats, and it has lots of minerals and vitamins. It contains no trans fats.

It has very high smoke point (about 190 degrees Celsius/ 375 degrees Fahrenheit), meaning that it won’t oxidize when heated. This makes it perfect for high heat cooking and, if you have enough of it, for deep frying. The batter will be crispier and will cook faster, meaning that it won’t have time to burn and turn carcinogenic.

It’s perfect for sauteing just about anything, adding amazing flavor to the food.

It can be used for baking as well, have a look at these Cornish Pasties, for instance. When used for pies, it makes the crust super crisp and flaky.

How to render the fat?

Using a large, really sharp chef’s knife is crucial, a small, blunt knife will make the job difficult. You could also partially freeze the skin for easier slicing. I don’t normally do it, because I have a really good knife.

Use a good pan/pot. I recommend using a nonstick deeper pan or Dutch oven. Don’t use a regular pan, the sediments will stick to the bottom of the pan and you will have a hard time cleaning the pan afterward.

The turkey schmaltz is solid, but not as solid as butter, for instance. It will start getting very soft again if left at room temperature.

I recommend using the skin from organically-raised turkeys. The fat stores the chemicals and additives the birds are fed and that makes it unhealthy for you too. The same goes for making lard with pork fat.

Make sure you strain the golden fat very well, through a very fine-meshed sieve. The impurities, if left in the schmaltz, might cause it to form mold. If the fat turns moldy, discard it.

Turkey fat (or any other sort) will keep for a long time. Store in jars, in the refrigerator, it will be fine for at least 6 months and up to 1 year.

My grandmother used to keep it in the pantry in the colder months of the year and only place it in the fridge in summer. But she would use it up rather fast, it was the cooking fat she used the most.

Always check how it smells before using. If the smell changes and the fat starts smelling rancid, you should discard it.

How to use cracklings? 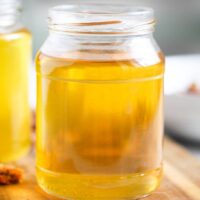 How to Render Turkey Fat

The amount is totally optional. Render as much as you have and choose a pan of appropriate size. This amount of skin makes approximately 800 ml/ 27 fl. oz/ 3 ½ cups rendered fat. If the skin is very thick and fatty, you will need about 15-20 minutes to render it. If the skin is thin (like chicken skin), 7 to 10 minutes will probably be enough.

It sounds good. Thanks for sharing.