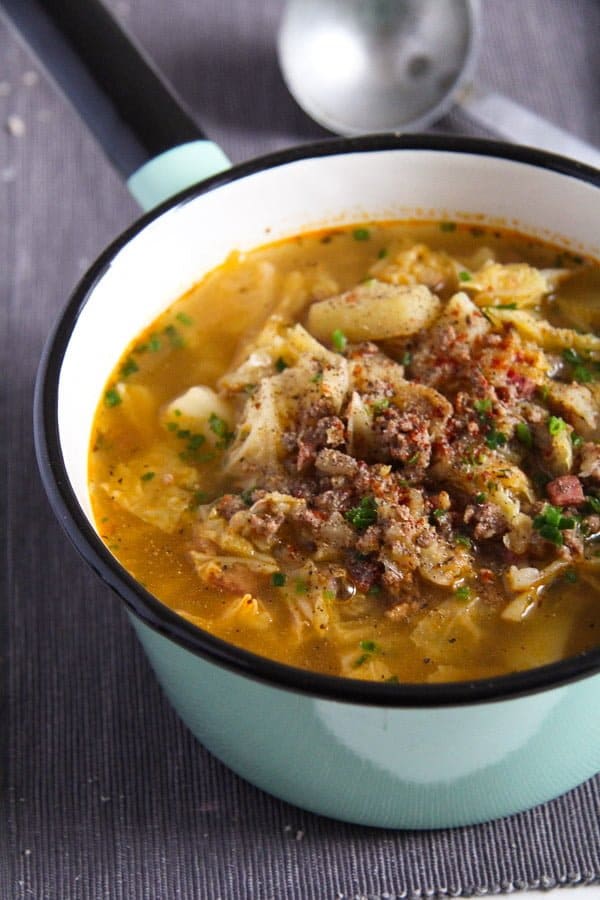 After the Chinese inspired Quick and Spicy Mushroom Egg Noodle Soup and the Indian inspired Spicy Yellow Split Lentils and Beef Soup with Vegetables, I have a German soup for you today, this German cabbage soup with ground meat and potatoes.

Like mentioned above this is a typical German soup made with cabbage, ground meat and potatoes, there are many similar recipes to be found in the German kitchen, made with white cabbage, pointed cabbage or German kale.

I have tried many of these soups during the past years spent in Germany and I must say I love all of them. There is something so comforting about a good, hot soup with ground meat and soft potatoes, don’t you think? And cabbage is one of my favorite vegetables anyway…

A soup I would only eat in autumn and winter, I think, when it is really cold outside, nothing for the sunny days.

In summer I would rather eat other kinds of soups, lighter ones, something like this Fish Soup with Potatoes and Garlic Sauce or this Delicious Romanian Spinach Dill Soup with Omelet. 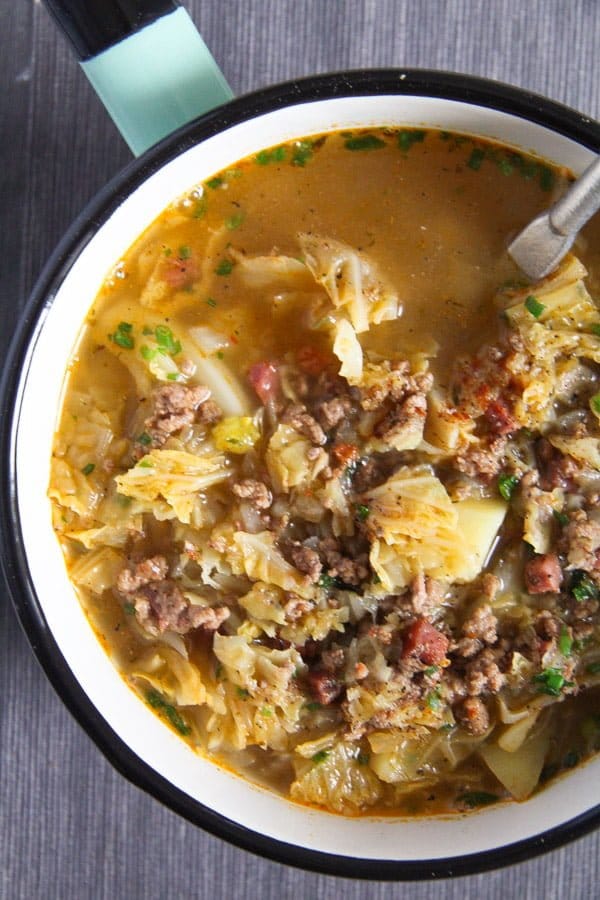 Savoy cabbage is a very popular sort of cabbage in Germany, you can buy it just about anytime and anywhere, it is cheap and there are many traditional German recipes made with savoy cabbage. For instance these amazing stuffed savoy cabbage rolls, so very German and so delicious!

Savoy cabbage has a curly appearance, emerald green, crunchy and tender leaves. I would say it is the prettiest sort of cabbage.

The cabbages we can buy here are huge, one head of savoy cabbage would be way too much for this soup. To make things easier, I weighed the cabbage I used, it was less than half a cabbage, about 450 g/ 1 lb.

I think that is an important part of this recipe, you should really feel the black pepper on your tongue. 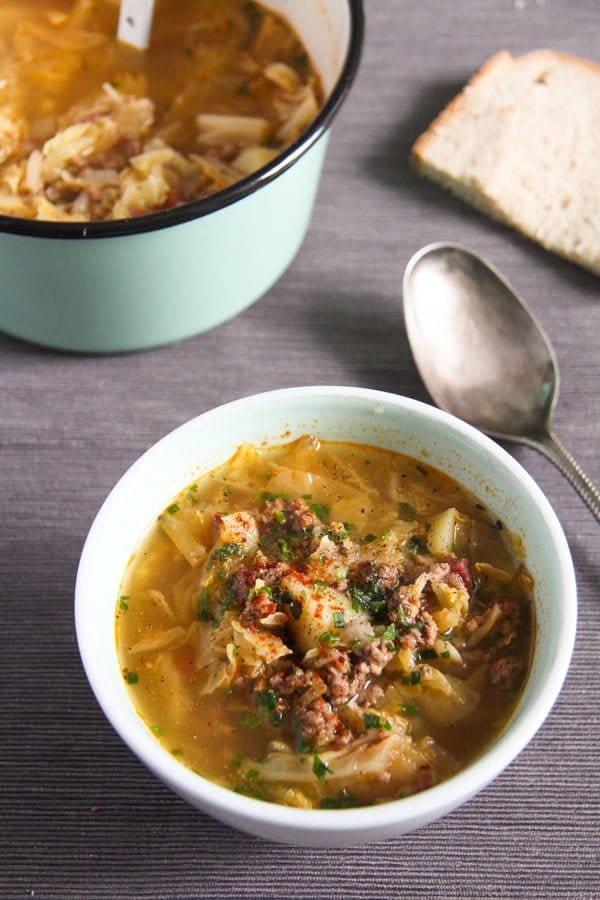 This savoy cabbage soup is very easy to make, a one-pot affair so to say, the only “challenging” part of it being chopping all those vegetables.

Once you’ve done that, there is not much work left to do actually. Just throw everything in the pot, following the indicated succession and wait for the soup to be done.

You can serve the soup either as it is or with a dollop of crème fraiche/smetana/sour cream.

The German savoy cabbage soup can be reheated, it tastes even better the next day. 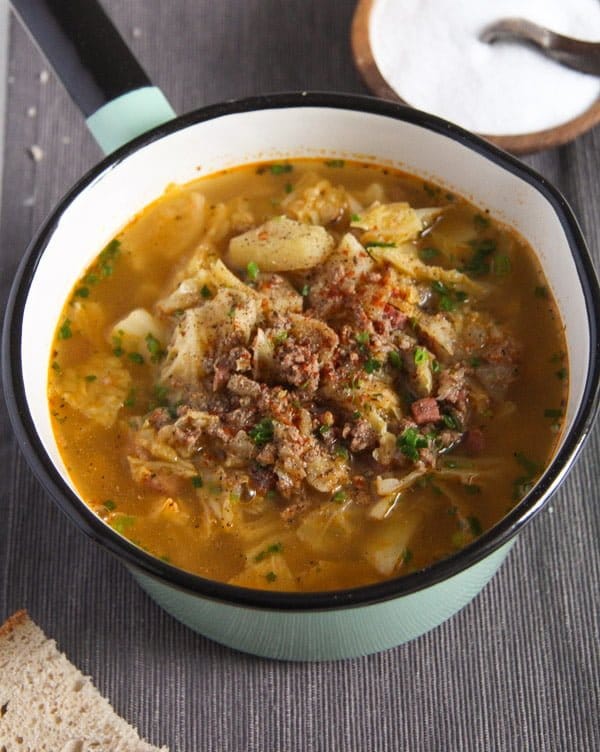 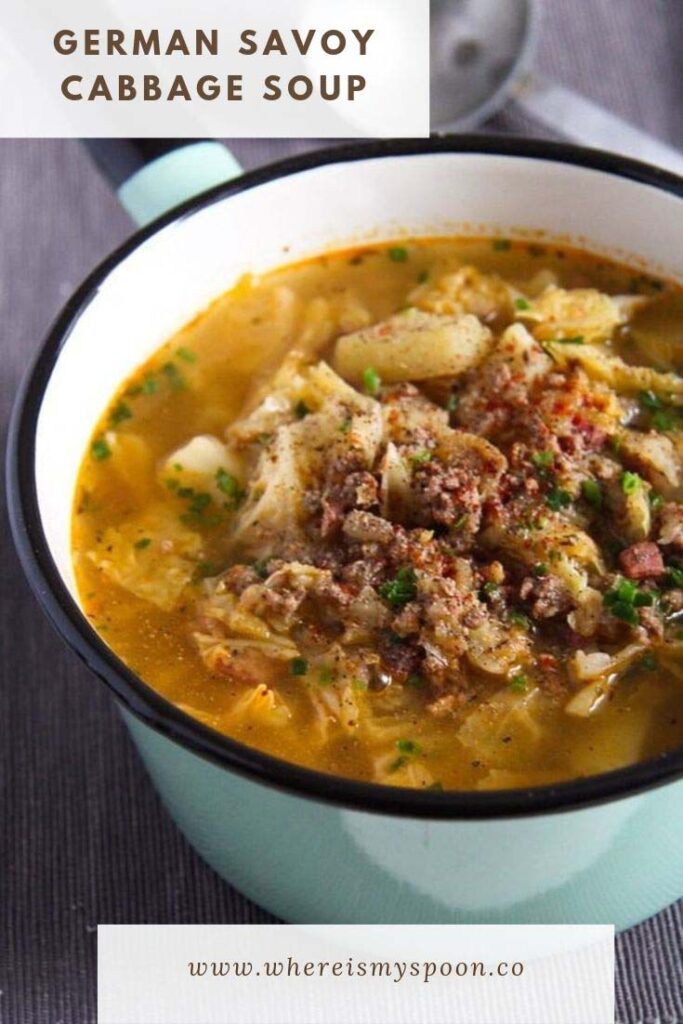 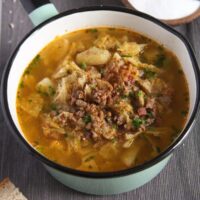 It's snowing here in WNC today. I have a love one in Germany and like to practice some of their foods. I'm doing mine in a slow cooker today in high for 4 hours. It smells so good right now. Can't wait to get some out to eat. Keep the German recipes coming.

Delicious soup! This ranks as the best ground beef soup I’ve ever made. I followed recipe pretty closely, only missing the chives and just used ground beef, not beef and pork mix. It was wonderful. I added fennel and cayenne pepper to make up for not having hot paprika as suggested by another commenter.

Hi Amy. That's so great to hear! Thank you for the feedback.

Hi Adina, I made this soup tonight and it was so tasty!! Thank you so much for the recipe. I made some changes, due to lack of ingredients. So, I didn't have mince, so instead I used sausage meat (swiss farmer sausage). And I used a mix of smoked paprika, sweet paprika and cayenne pepper. I added a little crushed fennel seed too. We will be making this soup a lot this autumn and winter

Hi Barbara. Thank you for the feedback. Sausages are a great substitution and I love the fact that you used fennel seeds, they are amazing. I also often use them for soups and when making Spanish meatballs, they add a flavor that is just out of this world. I will add them to the cabbage soup as well next time.

It looks absolutely fantastic! Can't wait for a cold day to try to make in in sunny Las Vegas!

I always love to learn a new way to use ground meat! And I don't think I've had it in a soup yet... This soup looks wonderful and I am glad to see someone else emphasising the importance of a big amount of pepper in certain dishes: I know many dishes that must be spicy especially from the pepper but some people don't understand why...

German cuisine is full of soups featuring ground meat, very hearty and delicious all of them. And many of these thick soups need a lot of pepper, chili is not very typical for old German recipes, so they had to rely on pepper for some spiciness. And it is really a different taste you get, nothing like when using chili.