One of the best things when being invited to a grill party (or inviting people to our grill parties) are the salads.

I like meat, but when it comes to grilling, there are really no surprise in Germany. You get the same every time: 2 sorts of bratwurst, finely ground and roughly ground bratwurst, steaks which everybody buys pretty much at the same butcher around here, pork “steaks” which are always marinated and Grillfackeln, which are some kind of pork belly grill sticks and which children enjoy a lot.

I do eat a steak or a bratwurst, but the thing I enjoy the most are the salads. Potato salad, noodle salad, salad “torte”, tortellini salad… typical German salads that are always a part of a good party and which always taste great.

Unlike other people, who don’t like change that much and stick to their trusted recipes, especially when other people are involved, I like to try different things every time.

If I have to make more than just one salad, I will usually choose a well-known one (probably potatoes) and a brand new one. And if I only have to make one salad, then I will definitely go for something new and leave the classics for the others.

It was the same with this Greek style feta pasta salad. 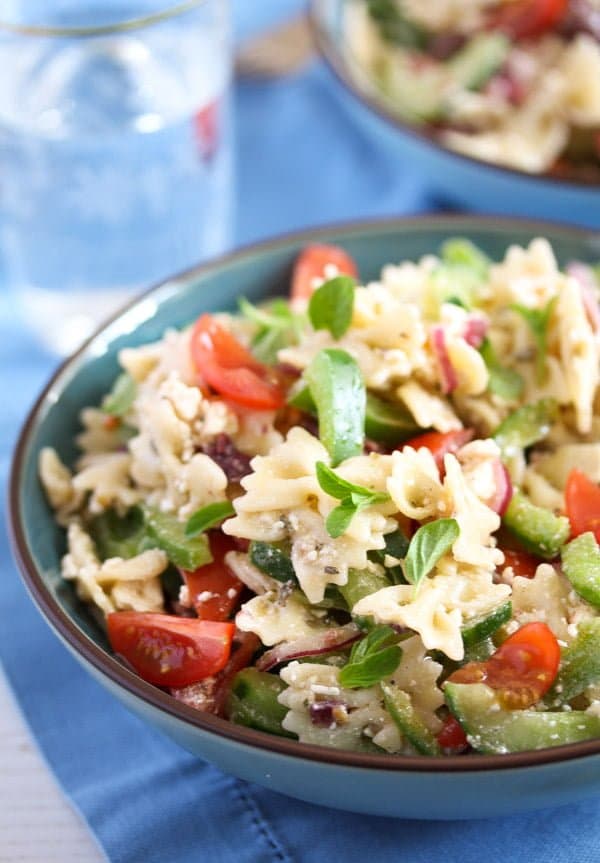 I chose to make this salad for a party organized by my friend only 2 weeks ago. She wanted me to make a Ramen  Napa Cabbage Salad with Sunflower Seeds and Almonds, I told her to go ask the other neighbor for that, I wanted to make something else. She didn’t protest, she knows that’s useless… when it comes to food, I pretty much do what I want.

And why this Greek style feta pasta salad? Well, I recently had a classic Greek salad again, the one without the pasta and I just remembered how much I loved it. Greek salad was one of the first salads I have ever made when I have started cooking… we used to love it and I used to make it very often many years ago.

We must have had it dozens of times in a rather short period of time, but soon enough I really started to enjoy cooking and experimenting, always trying something new… so the old things kind of got forgotten. 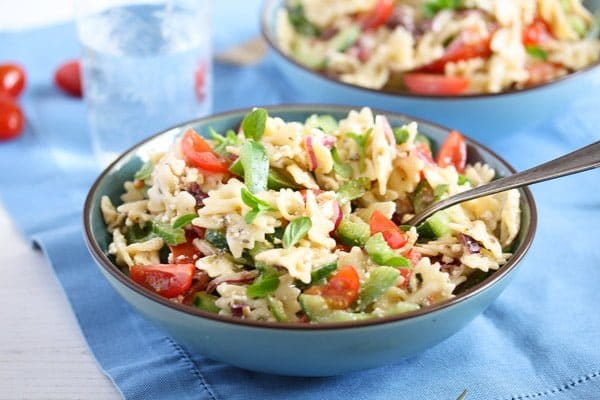 But after watching a TV cooking show recently, where they’ve made this glorious Greek salad very similar to the one I used to make, I decided it was time to make it myself again.

One important thing I’ve learned while watching the show though, was that you should never make your Greek salad with red or yellow bell pepper, only the green ones will make this salad authentic. So, I switched to the green pepper, being happy to have finally found a way of using that darn green bell pepper.

Most of the times, we get the bell peppers in a mixed package of three: 1 red, 1 yellow/orange and 1 green. I can always use the red and the yellow ones, but we are not particularly keen on the green one. It mostly spends a longer time in the fridge than its siblings and gets thrown in a pot of stock eventually. It is nice to have a recipe now where the unwanted green bell pepper can actually shine. 🙂 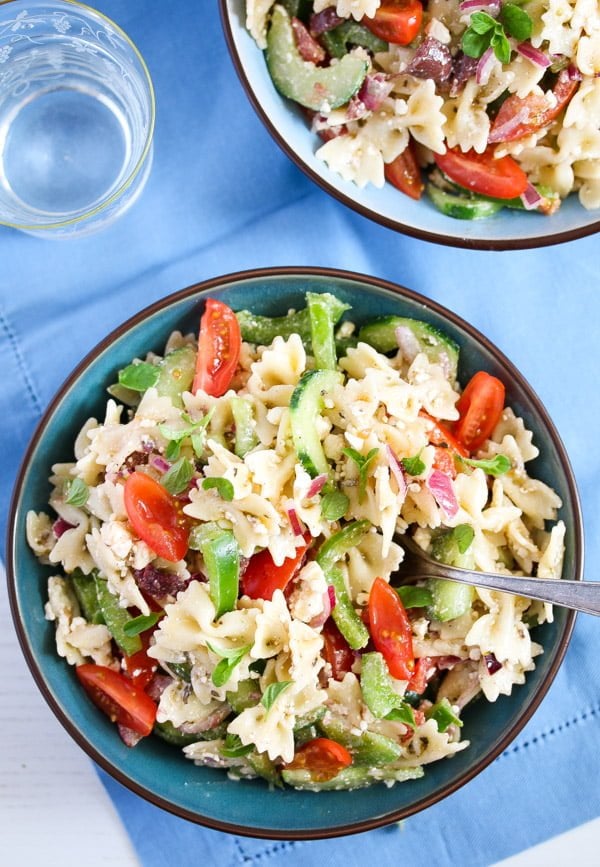 INGREDIENTS FOR THE FETA PASTA SALAD 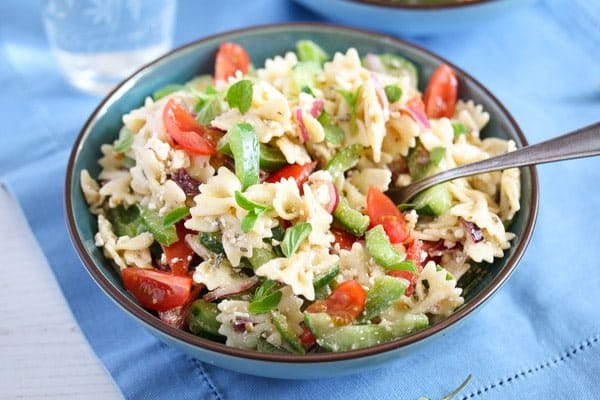 But it wasn’t! It was way too strong for a salad, especially when used in such a large quantity and it ruined the entire salad. I almost cried when I had to throw everything away, such a waste of time and ingredients (good olive oil is never cheap and the rest of the ingredients had its price as well). So do make sure you know what kind of olive oil you are using!!!!!

Make the feta pasta salad at least 2-3 hours in advance, so that the flavors have time to mingle and the salad has enough time to chill. The pasta salad with feta keeps well in the fridge, I’ve made a double batch last time and it was way too much, after two days in the fridge it still tasted good.

Stir the salad before serving it and adjust the taste again, if necessary, with more vinegar, lemon juice, salt and pepper. 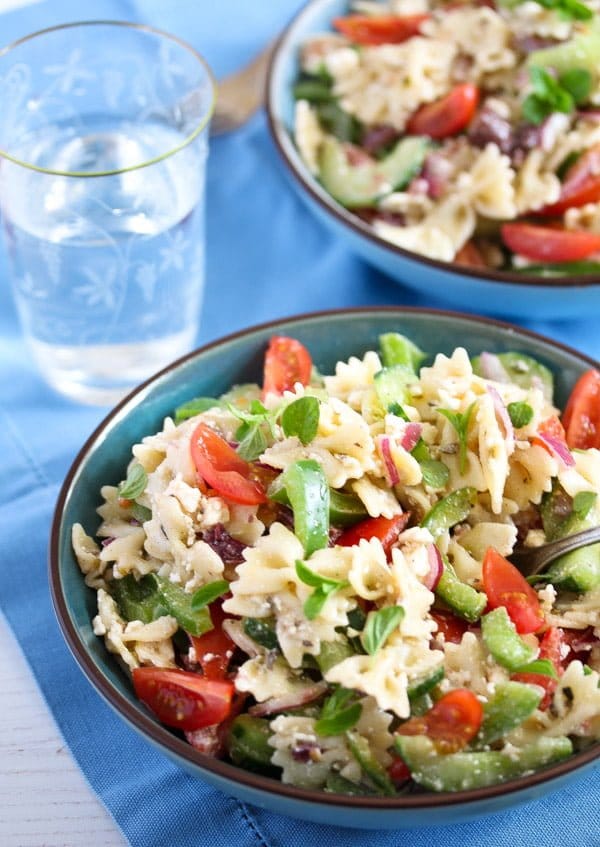 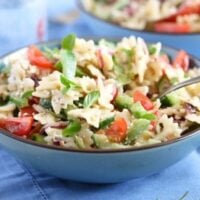 Love this salad! Perfect for summer and for picnics :)

Lovely refreshing salad! I also love salads as meals and probably have hundreds of versions.... Like you, I also change them all the time!

Pasta salads are so versatile! This one sounds delicious!