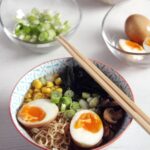 How to make dashi broth for ramen soup with soy sauce eggs, noodles and vegetables.

How to make dashi broth for ramen soup with soy sauce eggs is the last post from the Stocks and Broths series. I wanted to end with something that was completely new for me, something that I have never cooked or eaten before.

I’ve heard of dashi many times before but never got the chance to eat it anywhere or cook it myself. Japanese restaurants are not something you would find in rural Germany, the only good sushi I get to eat is when traveling to a larger city, like Munich or Cologne.

And to be able to buy Japanese ingredients to make the dashi myself, well, for that I would have to drive about 60 km to Kassel or order the stuff online.

So what can I say, my first try in Japanese cooking was a success and I can proudly present to you not only this homemade dashi but also a delicious ramen soup recipe topped with some of the most delicious eggs I have eaten in my life.

What to put in the ramen soup?

How to Make Bone Broth 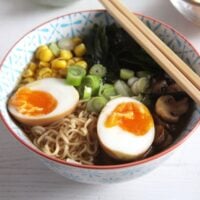 Second dashi, optional for later use:

Thank you so much for the detailed instructions, can't wait to make this! Jutta

Thank you, Nami, so nice of you to stop by. And thank you for your recipe and especially the very detailed instructions, they made everything so easy.

Hi Adina! Thank you so much for your kind mention. I'm so proud of you! You made dashi! Dashi is essential to Japanese cooking, and I'm so happy that you made it! The noodles look so delicious. Love your photography too! :)

This is the base for miso soup and is what makes the soup so good! Thank you for the easy recipe!

Adina - big kudos to you for making your own dashi and this delectable bowl of homemade ramen! I love Nami at Just One Cookbook and you did her proud. This sounds wonderful and looks amazing. Thank you for the shout-out, too. I'm so happy you saw those soy sauce eggs and made them. All the better that you liked them as much as we did! This is sensational...way to go!!

Thank you, Monica, for the eggs recipe, we love them!