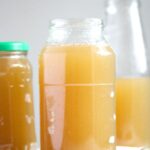 Venison bone broth made with deer bones, a delicious base for making soups, stews or sauces. Easy to make on the stovetop or in a crockpot.

Venison bone broth or stock might not be as common as the regular beef, chicken or turkey stock, but I do make it every chance I get.

I definitely don’t hunt, my mother-in-law’s husband does. He’s not the kind of hunter who just goes out into woods to hunt, he is actually responsible for keeping a certain area healthy, tracking down animals that are hurt, or hunting animals that are messing around in the corn or wheat fields around here (mostly boars in this case).

The bones I used to make this venison stock came from a young male deer, who apparently was trespassing some other buck’s territory.

Some of the meat was frozen, some was sold, but as it is almost always the case, nobody wanted the bones. Such a waste! So I took as many of them as I could fit into my freezer.

What is the difference between bone broth or stock?

The main one is that stock is made using bones without meat on them, while the bones used for broth still have some meat attached to them.

You can call this recipe either broth or stock because you can make it only with bones or you can leave some meat attached. I suppose it depends on where you get the bones. If you buy them at the butchers, chances are they are completely stripped of any meat, if you get them from a hunter (or hunt yourself), they will probably still have plenty of meat on.

However, the cooking procedure is the same, so you can use whatever bones you have and call this either a stock or a broth.

What do you need for venison stock?

How to make venison bone broth?

How to make venison broth in a crockpot?

How to store the broth?

The longer you cook the broth, the better. It will be more concentrated, more marrow will be released from the bones and that will make it turn more gelatinous. That is a good thing. It will become liquid again once you reheat it.

Don’t skip the roasting step. Roasting will brown and caramelize the bones and that means a lot of extra flavor.

Cook on very low heat when using the stove. This way you avoid emulsifying the fat and the stock will remain clearer. You don’t have to worry about this when cooking the broth in the crock pot/slow cooker.

How to use the bone broth?

The way you would use any other broth or stock. I use it to make really hearty soups, especially autumn/winter soups. You can use it to make sauces, goulashes, or stews. Or risotto or other rice dishes. 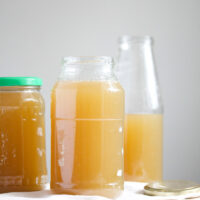 Can you use the meat that comes off the bones after roasting? I would like to make a stew with the meat and broth. Thanks.

Hi Jami. If you want to use the meat, remove it from the broth about 2 hours after you start cooking it. Strip it off the bones and set it aside. Then, return the "naked" bones to the broth and continue cooking the stock as instructed in the recipe. When there is a lot of meat on the bones, I always remove the meat once it's soft; if you leave it to cook for 8 hours, it will lose most of the flavor.