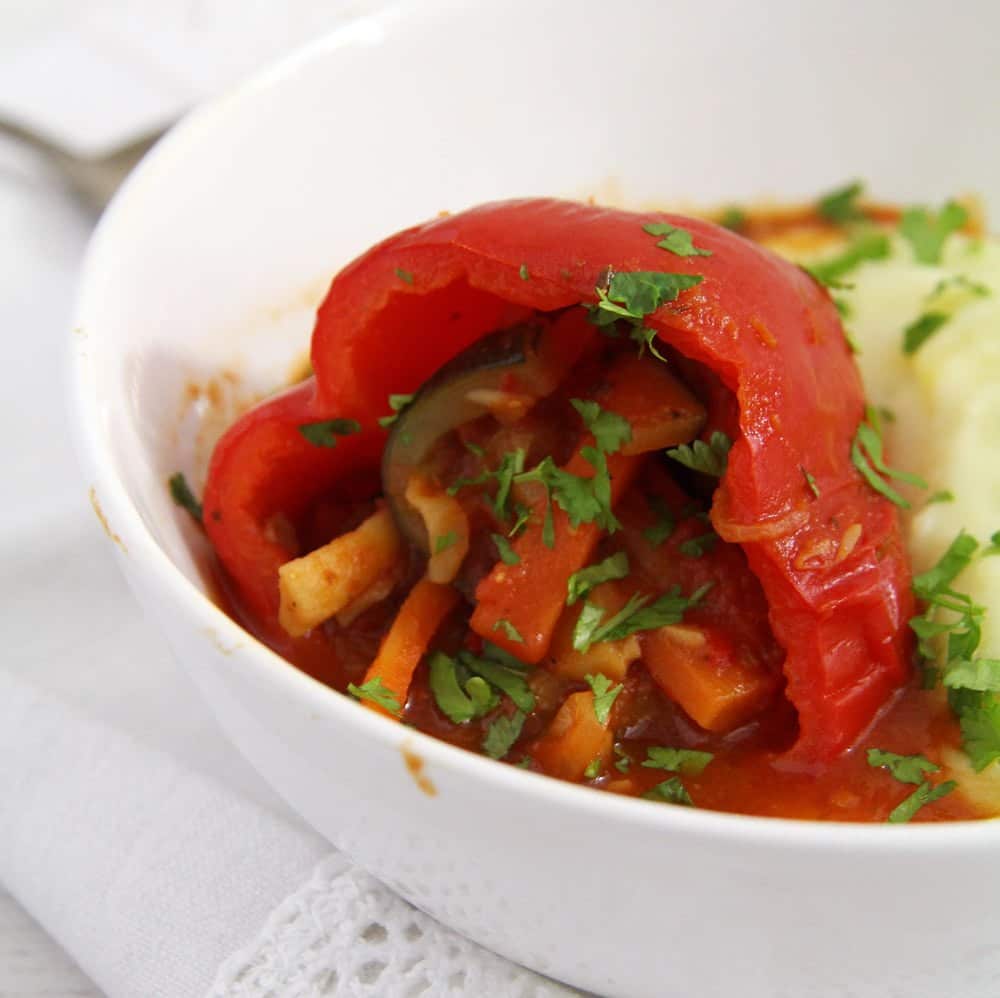 An easy and healthy vegan stuffed peppers recipe without rice, just peppers filled with vegetables and simmered in tomato sauce.

I do love my stuffed peppers. I make them often, I change the filling according to my mood and what happens to be in season and if there is a picture that I am bound to click on Foodgawker or Pinterest, then it is for sure the picture of a stuffed pepper. They have something so appealing to me, I cannot resist. 🙂

And like I have mentioned a couple of times here, I have hundreds of cookbooks, hand-written recipe notebooks and magazines and I’ve noticed that if a cookbook – whether Yotam Ottolenghi Jerusalem: A Cookbook 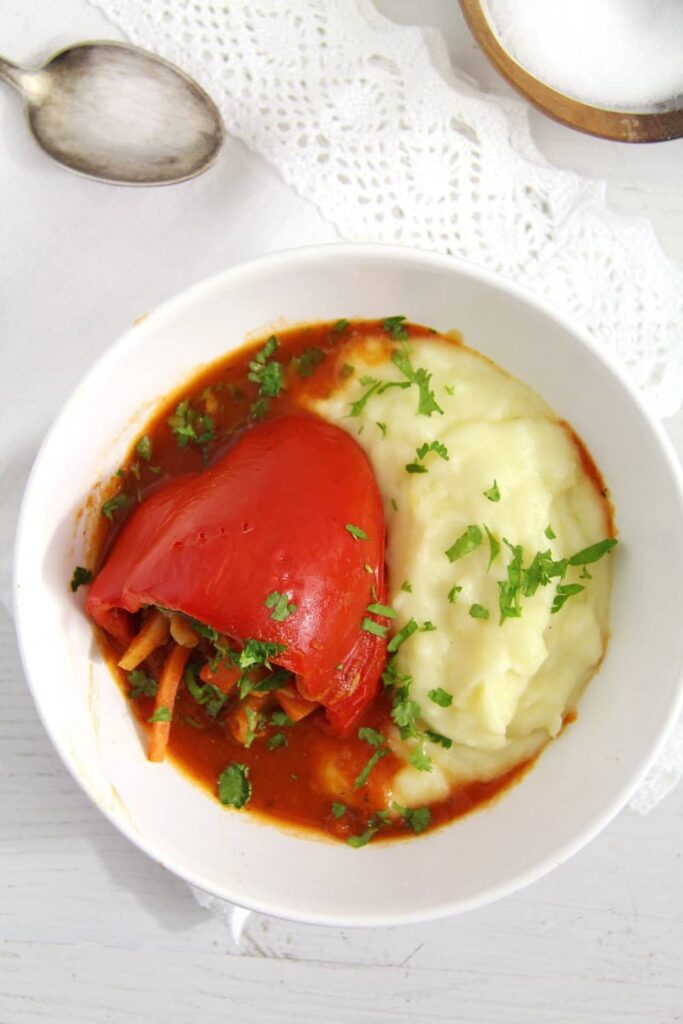 I don’t know how it came that peppers became one of my favorite vegetables, except tomatoes they are the one veggie that I always have in the house, I eat them raw every day, I put them in just about anything, I cooked them in more different ways than any other vegetable probably.

And they used to be the most hated vegetable for me as a kid. I have always eaten them raw, but cooked peppers were evil for me back them, probably the way that mushrooms are a thing from the devil for my kids nowadays. My grandmother always took care to leave the peppers in large chunks in any dish she made using them.

Otherwise, if the pieces were too small, I would not have been able to pick them out entirely and then I would refuse to eat anything anymore… 🙂 Children! 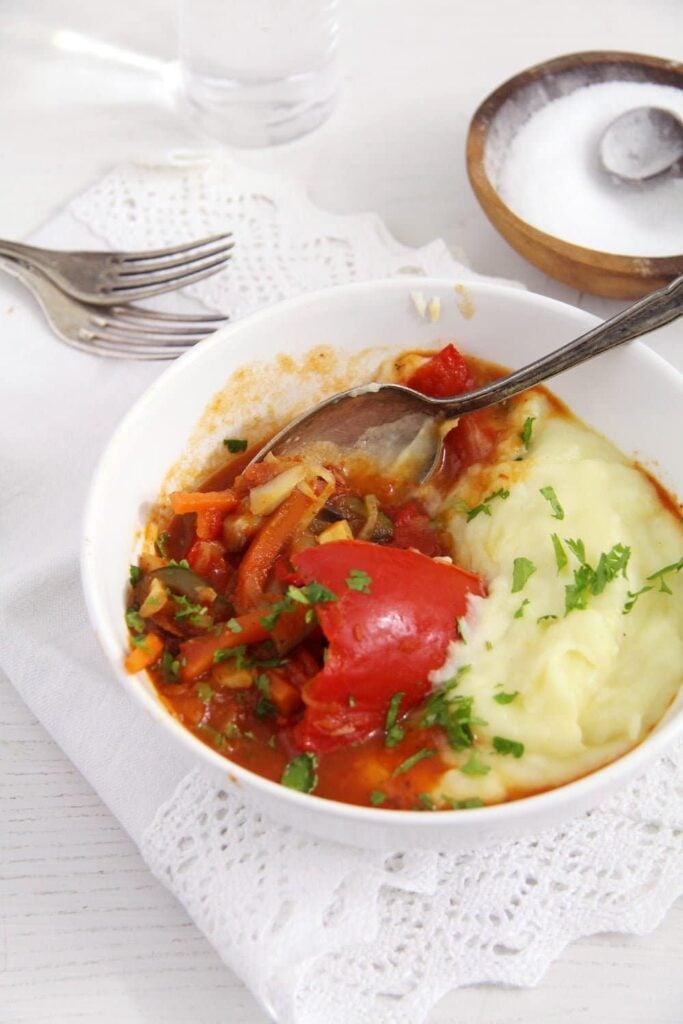 And back to today’s recipe: this vegan stuffed peppers recipe is just amazing! I am so sure anybody would like these stuffed peppers, either vegans, vegetarians or meat lovers. Even if you normally like your peppers stuffed with meat, trust me, you will not miss the meat in this case.

There is so much flavor involved, so much comfort due to that delicious tomato sauce and if you add the mashed potatoes (please do) you will make anybody happy.

I used my homemade tomato sauce to make the sauce for the vegetarian stuffed pepper recipe, but you can use any kind of tomato sauce you like. I usually take the listed vegetables to fill the peppers, but you can experiment there as well, take what you like best and what is in season.

HOW TO MAKE VEGETARIAN STUFFED PEPPERS WITH VEGETABLES

As mentioned above, this is a vegetarian or vegan stuffed peppers recipe without rice. So, if you are eating low carb this is the recipe for you, no rice or any other grains, just bell peppers stuffed with some more veggies. But, as I am not so much into low carb myself, I always serve these healthy stuffed peppers with mashed potatoes.

The combination of those flavorful vegetable stuffed peppers, tomato sauce and mashed potatoes is just heavenly! 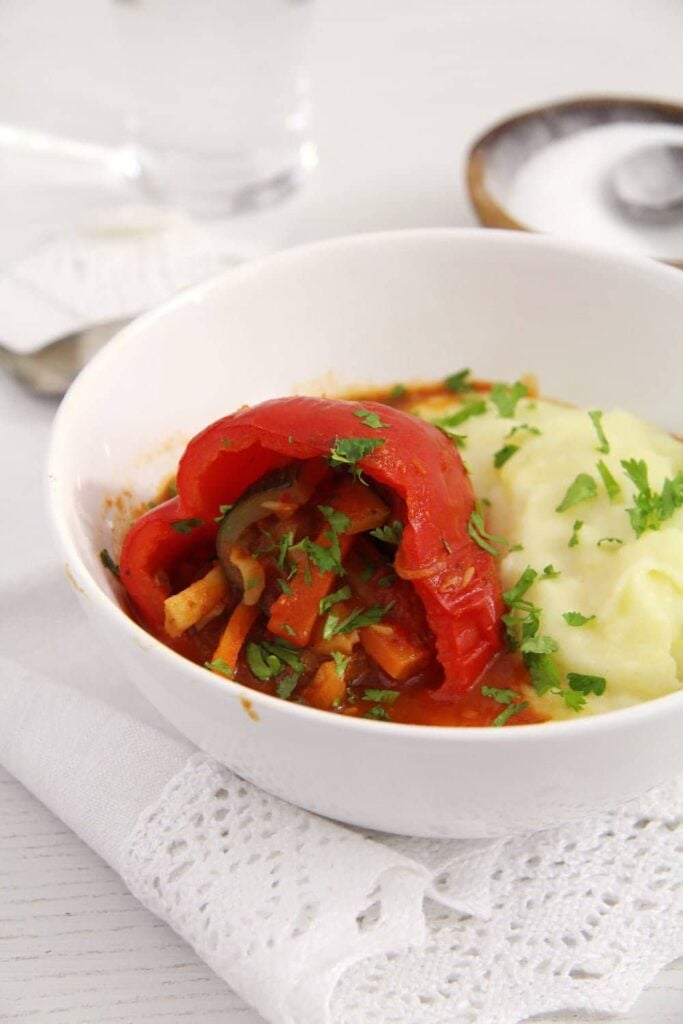 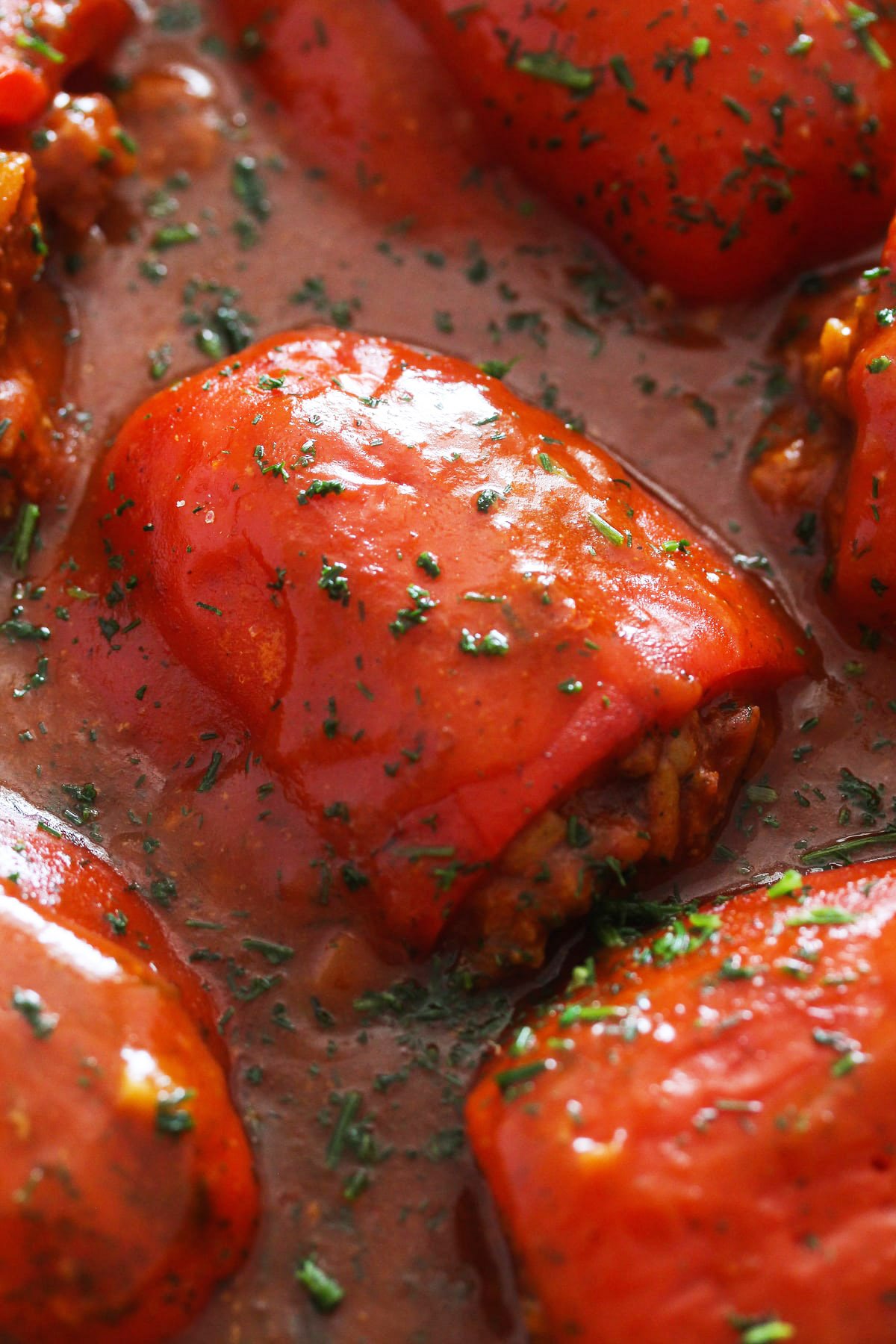 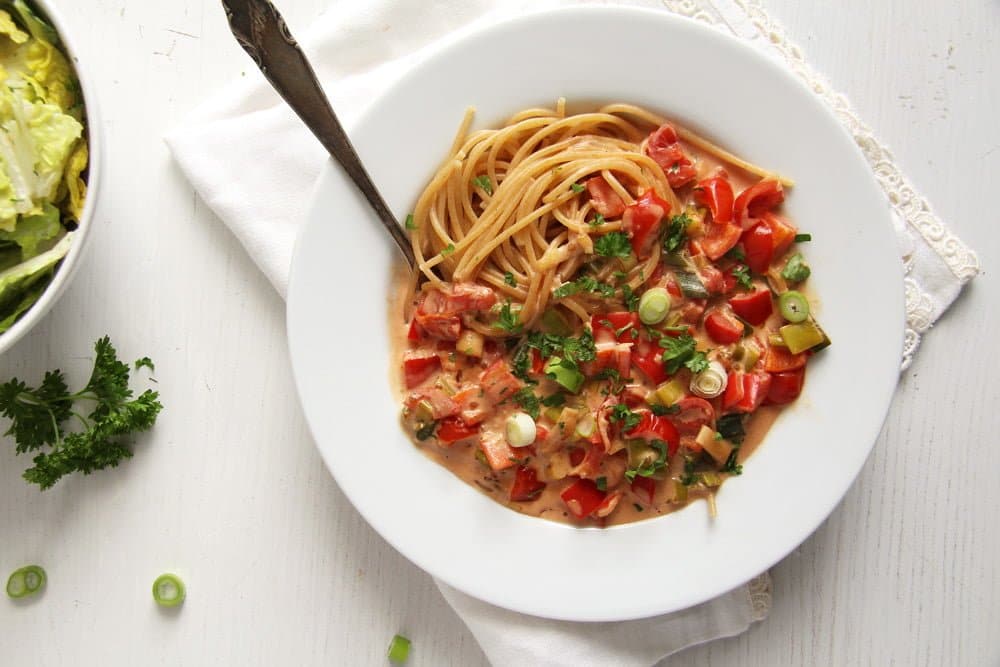 Ahaa. Very good tip: boil pepper before baking. I bake them ca 45 minutes and these are still not soft.
Thank you!

Great tip to parboil the peppers first! I love peppers too. These look so delicious Adina. My kids think the same thing about mushrooms that yours do. And I so LOVE mushrooms. Have a beautiful week my friend!

They look fantastic served with creamy mashed potatoes!! We eat lots of peppers, but mostly raw because hubby doesn’t eat cooked veggies, not even filled with his favourite ground meat.

this is so healthful and flavorful, not to mention colorful! what an awesome meal. 🙂

These stuffed peppers are very different and vibrant and delicious looking.. I am gonna try this for sure..