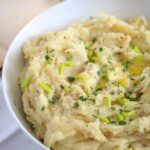 Creamy and comforting recipe for the famous Irish potato and cabbage dish or Colcannon. 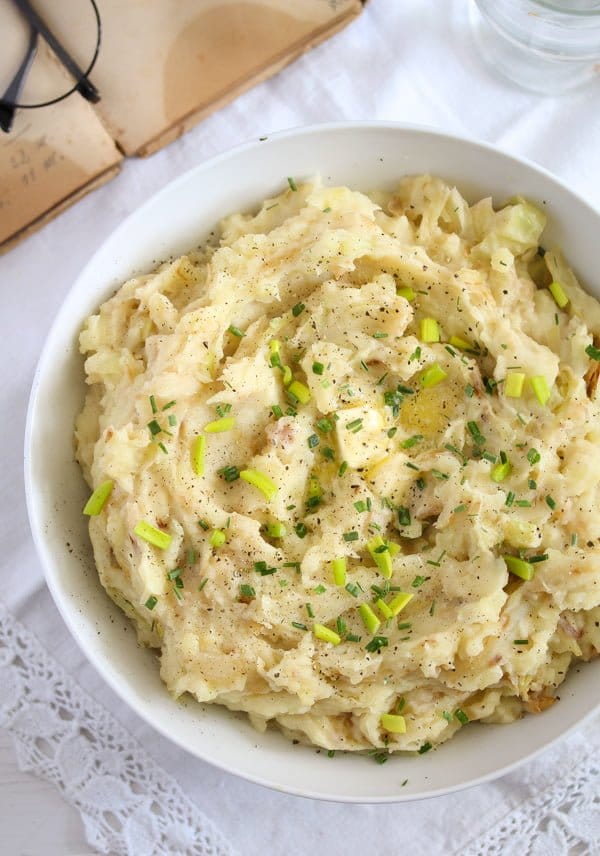 What can be more comforting than a hot creamy bowl of mashed potatoes and cabbage, onions and lots of butter and cream? For a potato and cabbage lover like myself hardly anything, I suppose.

I made this Irish colcannon for the first time years and years ago, it was probably one of the first dishes I have ever cooked.

Why? Not only because both my husband and I love any potato and cabbage dish, but also because this colcannon was cheap and during those times when we were both studying and were only working enough hours to help us survive, these were the kind of dishes we were eating most of the times.

Potatoes and cabbage dishes, stewed beans, stewed cabbage, hearty vegetable soups, homemade bread and lots of Gouda cheese (which is very cheap in Germany). Filling and healthy food that costs almost nothing 🙂 Hardly any meat and when I was buying any, it was mostly chicken legs or ground pork.

History of the Irish colcannon

The word colcannon comes from the Irish cal ceannann, which means white-headed cabbage.

The history of the Irish colcannon starts with the potatoes, which arrived to Ireland sometimes during the 16th century. How that happened is pretty much unclear, but the fact remains that by the beginning of the 18th century the potatoes have become one of the most important foods in the Irish diet.

Colcannon – the iconic Irish potato and cabbage dish – was first mentioned in a traveler’s diary.

William Bulkely from Wales had colcannon during the Halloween night he spent in Dublin in 1735: “Dined at Cos. Wm. Parry, and also supped there upon a shoulder of mutton roasted and what they call there Coel Callen, which is cabbage boiled, potatoes and parsnips, all this mixed together. They eat well enough, and is a Dish always had in this Kingdom on this night.” (smithsonianmag.com)

Colcannon is indeed a traditional Halloween (Oíche Shamhna) dish and in the past charms used to be mixed in this cabbage and potato dish.

For instance, if you found a ring in your colcannon it would mean you would get married, while a thimble meant you would remain a spinster in the coming year. A coin would mean money coming your way, while a rag meant poverty. A stick would mean that you will get beaten by your spouse soon… :-

How to make the mashed potatoes and cabbage?

How to serve colcannon?

I suppose that most people serve colcannon as a side dish. However, most of the time, we have it as it is and being the Romanian that I am, I place some pickled green tomatoes or zucchini on the table. I need nothing more!

Or maybe though: a fried egg on top is divine!

If you want to serve the potatoes with cabbage as a side dish, you can have it with any kind of beef stew, a nice Guinness Irish with beef stew, for instance, beef Bourguignon or any other beef, lamb or pork stew you like.

You can also have colcannon with sausages (bangers), boiled ham or gammon. 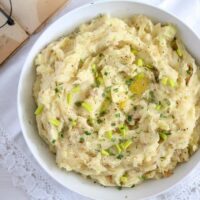 Stirring Cheddar into colcannon is not traditional, but so delicious. It is up to you if you want to use it or not. More available yellow/orange cheddar is also an option if you cannot find the white sort.

This is a great post! I’ve seen the word Colcannon before but never knew anything about it. That is perfect comfort food for me. Potatoes and cabbage - you can’t go wrong!

Adina, these potatoes look wonderful! Sautéed cabbage has a lovely flavor. Mix that with cheese and YUM!

A friend of mine just came back from 18 months in Ireland and she raved about the Colcannon. I've been planning to make it this year, so thank you so much for the recipe. It looks yummy!

What a delish dish, Adina. I've never made colcannon and you sure have tempted my taste buds for sure. You absolutely can't go wrong with cream and potatoes....sounds divine. I'm intrigued by the charms. So interesting, but I'd be nervous about choking on them! Practical 'ole me.... :D

This would be fun to try for St. Patty's day. I've heard this dish is excellent.