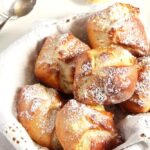 It originates in a habit that peasant women in Moldova had of stuffing the corners of their aprons in the girdle to make sure that it wouldn’t get in the way while they washed or worked in the house. I suppose this kind of folding and stuffing the apron was somewhat similar to the way of folding the pastries. So now you know and I do too. 🙂

For the filling, you will need cottage cheese, raisins, semolina, sugar, vanilla, lemon zest, and a pinch of salt.

Place the cottage cheese in a fine-mesh sieve and let drain for several hours.

Savory alternative: fill the pastries with crumbled feta cheese. Add a little salt and pepper and some chopped dill, if you like. 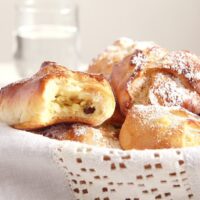 You should sell these. I'll place an order for 2 batches right now. :)

Hi! I am Norwegian,living with a romanian barbat in Spain. His sister sent us some of these and they are delicious! I am so happy that i came across your blog, because like in Germany, we can not get a hold of the cheese here. I love papanași and i am gonna try to make both these and the boiled papanași. I have made cozonac often and that too is just so good!

Hi Jane. So nice to read your comment. I hope you like the papanasi, we all love them!

The Poale in brau name is not because the farmer did this to stay clean it’s rather the technique in which you fold the dough to make the form of the Pastry . You fold the corners in the middle