Kebabs generally, not only turkey kebabs, are always a hit at any grill party in Germany. Especially the kids prefer kebabs to steaks, for instance. OK, bratwurst might be the first choice for the children, but kebabs are always close behind.

I am not the grill master around here, that’s a job for my brother-in-law, but if I don’t cook the meat on the grill, it doesn’t mean that I don’t take a part in the whole process.

And my part is not only to make the salads and buy the bread, but also to find new ways of marinating meats, so that we don’t always eat the same (rather boring) already marinated meats that we can buy.

And because when grilling I prefer turkey or chicken to red meat, it is mostly these kind of meats that I get to take care of.

That’s how I got to make these turkey kebabs for the first time. As I mentioned in a lot of posts featuring turkey meat, I always buy our turkeys from a farmer in the village, so my freezer is full with turkey meat most of the times.

And those huge turkey breasts are just perfect for making turkey skewers!

Kebabs have their origins in the Middle Eastern cuisine and are basically various cooked meat dishes.

In English the word kebab refers to different kinds of meat cut into small pieces or ground, which are cooked on a skewer. However, in Turkey and Middle East the word kebab is used to describe a variety of meat dishes.

Kebabs have a very long history, we could say that the kebabs exist ever since fire was discovered. Archaeological excavations found stone supports for skewers, which were used before the 17th century BC, ancient Indian texts and Homer in his Iliad also mention pieces of roasted meats on spits (Wikipedia).

Kebabs are not only popular in Turkey, but in a lot of countries all over the Middle East, Asia and even some parts of Africa.

In Afghanistan, for instance, kebabs are made mostly with lamb, are spiced with lemony/sour spices like sumac or dried ground sour grapes and are served with Afghan naan bread.

The khorovats are a national dish in Armenia and consist of larger pieces of meat, mostly pork, grilled on flat skewers served with onions and peppers.

In Greece there is the gyros, which is widely popular in Germany as well, I cannot count how often I have eaten it… The pieces of meat are usually served in pita bread or as a gyros plate with fries, salad and tzatziki.

There are countless types of kebab to be found in India as well, for instance the seekh kebab, made with spicy ground meat formed into cylinders and then skewered or the tunde ke kabab, which is said to contain 160 spices.

There are also several types of kebab to be found in Iran as well, kebabs made with beef, lamb or chicken, often served with lavash bread, rice, grilled vegetables or various salads.

Kebabs are super popular in Israel, they are often made with spicy ground beef or lamb and are served in probably just about any restaurant.

And these are just a few examples, kebabs are a staple in many other countries, like Bulgaria, Iraq, Azerbaijan, Bangladesh, Pakistan, Indonesia, Nepal, Malaysia, Thailand, Egypt, China and so on.

HOW TO MAKE TURKEY KEBABS?

The recipe for these particular turkey kebabs could not be easier, the “most difficult” part of it being to cut the turkey breast into very similar sized cubes.

That is important because you want that all the meat cubes make contact with the grill pan while cooking, so that all of them are cooked in the same time thus all of them remaining juicy and tender.

If some cubes are too large they will prevent the smaller cubes from touching the grill, so do make an effort to cut them all as evenly as you can. A good chef’s knife

is what you need for this task.

When it comes to the spices used to make the marinade for the turkey kebabs, I have kept it rather simple, using spices that are to be found in most spice cupboards: salt, pepper, sweet ground paprika, dried thyme, vinegar and olive oil.

You can definitely go from here and add more spices or completely other spice combinations to your taste.

Marinade for the turkey kebabs: 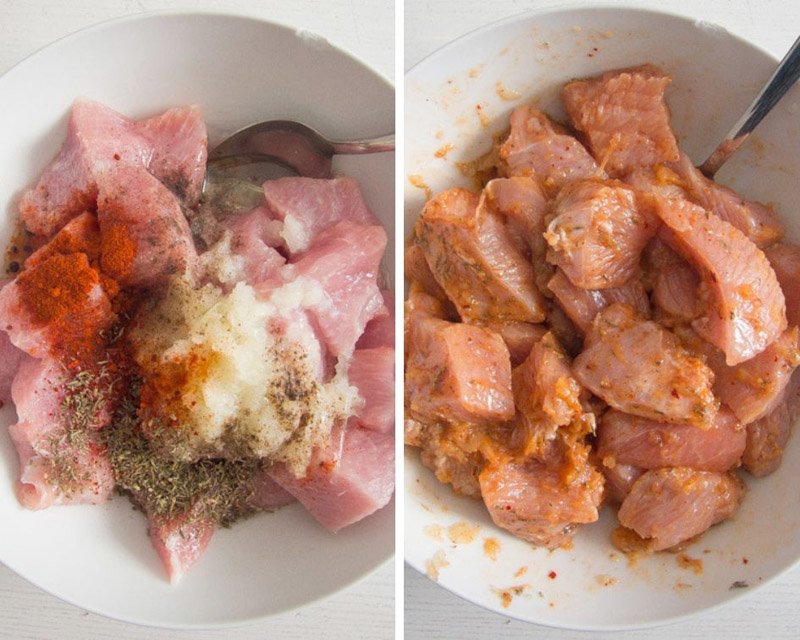 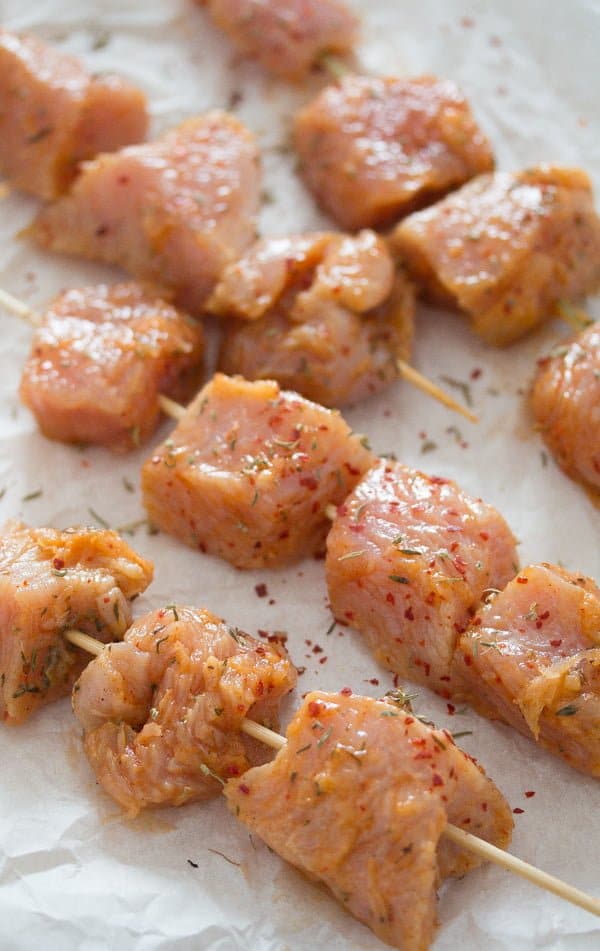 How to cook turkey kebabs in a grill pan: 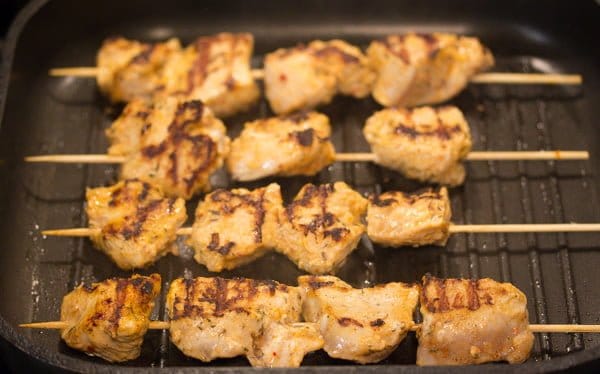 HOW TO SERVE TURKEY KEBABS? 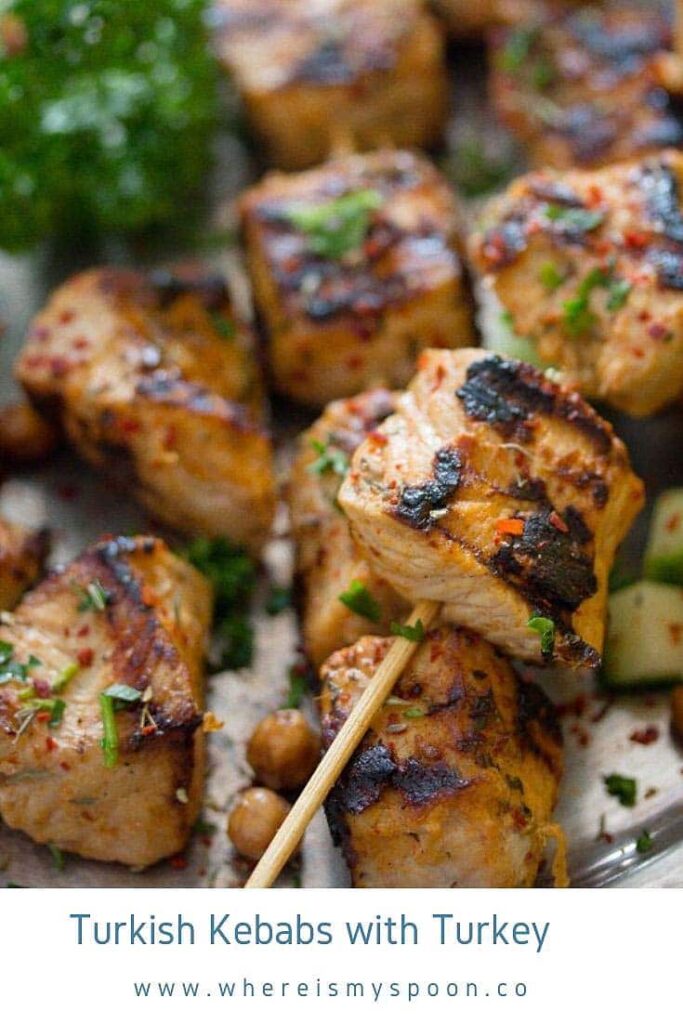 How To Make a Basic Yogurt Dressing – Low-Fat, Healthy and Variable

I never thought to grill turkey before!! I’ll need to start doing it. I love how simple yet flavor packed these kebabs are…and so perfect for summer.

Never thought of using turkey in kebabs and this is brilliant idea! I also cry a lot while grating onion so I feel you. But I bet it makes the turkey much more flavorful.