Shopska salad with tomatoes, cucumbers, peppers and feta, a fresh and delightful Bulgarian or Croatian salad.

Shopska salad – one of the most popular salads in the Balkan area and Eastern Europe. I have been eating a version of this shopska salad all my life without even knowing it was called like that.

Apparently, the shopska salad was created in the Shopluk region of Bulgaria during the 1960’s “as part of a tourist promotion by the socialist party to highlight local ingredients”.

Nowadays, the shopska salad has become a standard not only in the Bulgarian cuisine, but also in Croatia, Serbia, Macedonia and so on, all over the Balkans and parts of Eastern Europe apparently. And the salad is really not very different from the Greek salad (made with olives) or the Turkish Coban or Shepherd’s salad.

And some interesting information I found when reading about the origins of the salad. 2014 the shopska salad was voted as the most popular food in Europe in a “Tastes of Europe” competition. It was followed by the Lithuanian beet soup and the Romanian sarmale. Yuppy! My beloved sarmale made it in the top 3!

I first identified this tomato cucumber and feta salad as a shopska salad during our holiday in Croatia this spring. We ate a lot of great food there, the cevapcici being some of the best I have ever tasted, but what impressed me the most was the shopska salad.

So familiar, yet so different from what I have eaten before. And so good, I could have eaten it every day. Well, I did not manage to eat it every day while we were there, but at least every second or third day…

As already mentioned I ate lots of similar salads during my childhood and youth in Romania. My grandmother would make it often in summer when tomatoes, cucumbers and peppers were sweet and plentiful, but she never added feta to the salad.

We had feta (Romanian telemea) often together with this salad but always on the side, not mixed or sprinkled over the salad.

And then there is, of course, the famous Greek salad, which I have made dozens and dozens of times and which is also another version of the shopska salad including olives. And maybe you would like to try a Greek Pasta Salad? Delicious and perfect for a potluck or any gathering this summer.

But the Croatian version of the shopska salad was better than all the regular tomato, cucumber and pepper salads I have tasted before.

The first time I had it in Croatia I didn’t even order it myself. It was one of our friends who ordered it as a side dish for cevapcici. He was served such a huge shopska salad that all of us could eat something of it and I think I was the one who ate the most… So good! That creamy cheese sprinkled or rather smeared over those crisp and delicious vegetables… Heaven!

HOW TO MAKE SHOPSKA SALAD

The shopska salad is best served immediately or on the day you make it, but leftovers the next day are fine as well. 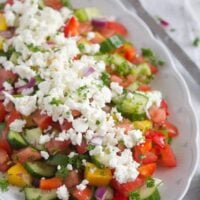 One of my fav. It's interesting how the same combo of salad ingredients are known by different names in different cultures.

Adina, such a lovely salad! So fresh and colorful and the feta cheese - Yum!

That's the combo I love to use in my salad too, but didn't know it's a specialty from Balkan...really fresh and tasty!