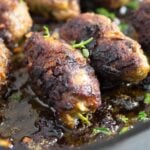 Cevapcici or cevapi, delicious grilled Croatian sausages with lots of garlic and paprika.

This cevapcici recipe is probably the best homemade sausage recipe I know. Easy to make, incredibly hearty and flavorful, a success with anyone who ever tasted them.

You definitely have to try them this summer. They are really summer food for me, I always associate grilled sausages with hot Romanian summers, cold drinks, and garlic sauce.

The Croatian cevapi or cevapcici are also very similar to the Romanian “mici” or “mititei”, which are THE BEST grilled sausages if you ask me. 🙂 But I might be biased here… 🙂

What are cevapcici or cevapi?

Cevapi or cevapcici are grilled sausages made of a mixture of ground beef and pork, seasoned with lots of garlic and paprika. Originally this kind of sausages were made with ground lamb, but nowadays beef or pork are more common.

This cevapcici recipe is very similar to Turkish meat rolls or beef kofta. They originated in the Balkan area during the rule of the Ottoman empire, who had a century-long influence all through these Balkan and South European countries.

Here are another few Ottoman inspired recipes, that you will probably find variations of in the Balkan area and all through the South European region: Savory Cheese Pie with Quark Feta and Yogurt, Zacusca – Eggplant and Red Pepper Spread, Sarmale – Cabbage Rolls with Pork and Rice or Stuffed Vine Leaves with Ground Meat and Rice.

How to make Croatian sausages?

Well, the cevapcici recipe is simple, with just one thing that makes it very different from another kind of homemade sausage. The sausages are made with baking soda, which helps tenderize the ground meat, making the cevapi less dense, lighter, softer. So good! You should definitely not leave the baking soda out. You could make the cevapi without it, but you will definitely miss on something.

How to form the cevapcici? 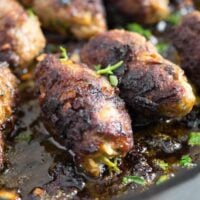 This is not croatoan meal... it is popular in entire region... but is part of bosnian and serbian cuisine... not croatian

I have enjoyed cevapcici many times; made by a Croatian dance troupe in Anacortes WA to fund their travels, costumes, etc. They grill the cevapcici over charcoal and serve them on a crusty roll with an onion sauce and sometimes red pepper sauce. They sell them at an Art and Crafts festival. So delicious! I would love to know if the onion sauce is traditional and how it’s made.

Hi Kim. I've never had the onion sauce myself, what we always had in Croatian restaurants were raw chopped onions on the side, but not cooked or in any sauce. The red pepper sauce was served separately.

I lived in Munich in the late 1960s where I often bought cevapcici from the street vendors who had immigrated there from southeastern Europe. I loved them and have missed their delicious flavor all these near 50 years! I can’t wait to try your recipe. Thanks!

I love a good sausage so the moment I say "lots of garlic and paprika" I knew these would be awesome! Three types of paprika - I'm all in! These looks fabulous and I love that I can make them at home. There is nothing like a tasty homemade sausage. Sorry for the long absence. I see that I've missed alot. I'll be perusing them to see what I've missed. The fennel and apple have already caught my eye.

Football is not my specialty either, but it probably should be.... as I have four boys and live in New England where the Patriots are what it's all about. These sausages look to die for!!! I know nothing about Croatian cuisine, so many thanks for expanding my horizons and palate. My boys will all love these cevapcici, thank you. Hope you and your family are having a wonderful summer so far!