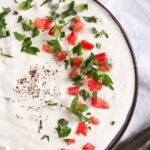 This is a hardcore garlic sour cream sauce made with a whole garlic bulb, tomatoes, and sour cream.

The best sour cream garlic sauce, Romanian-style. That means: more garlic than in any other garlic sauce you’ve ever tried!

I am Romanian and if there is one thing that cannot be thought out of the Romanian kitchen, that must be garlic. It is, at least for me, a crucial ingredient in cooking.

Just as an example: my German mother-in-low and a German friend of mine both said they never buy garlic, because one only needs one or two cloves in a recipe for once in a while, so they invariaously end up throwing away the rest of the bulb because they could never think of using it up in any other way than maybe an extremely mild tzatziki. And as you can only buy garlic by bulb they prefer to leave it out of their kitchen entirely.

I buy garlic not by the bulb but by the sachet. A sachet contain 3 or 4 bulbs, sometimes more. I use up this sachet in a matter of weeks.

My family learned to love garlic as well. Both my children adore this sauce. When I make it as a side for grilled meat, they just forget about the meat completely and prefer to eat just garlic sauce on toasted bread.

They moan a little while eating the garlic sauce because it is really hot on the tongue, but they keep eating and after one or two slices of bread they don’t complain anymore. Probably because their tongues get numb after a few minutes.

My son, when he was smaller, got worried about vampires and asked me if they really exist. I told him that even if vampires existed, they would never consider biting him. As he is half Romanian his blood smells like garlic, so a vampire would never dare touch him. He was really reassured by that and proudly told his grandma and friends about it.

One thing that I have to warn you about, probably unnecessarily, is that you will stink for at least 24 hours after eating this. So I recommend eating this on a Friday or Saturday or during your holidays. Otherwise, people at work might complain. Or bring your work colleagues the leftovers of the sauce (if you have any, I never do), so that you will all happily stink together. 🙂 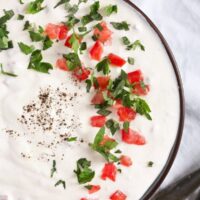 Your mujdei recipe (sour cream version) is very similar to others, which is fine so my comment has more to do with the garlic “controversy”, which I just don’t understand. I’m Irish and so grew up with having garlic in the form of garlic powder sprinkled daintily into spaghetti and other Italian dishes by my mother.

However, upon adulthood, I set out on an international career, living and working in many different countries. Though the cuisines vary widely, virtually every one of them employs garlic extensively (South and Southeast Asian, China, Japan, Korea, all of the Middle East, Latin America and Central and Eastern Europe (including Germany!!!). I lived and worked in Romania for about 3 months over two years (mainly Bucharesti, the Black Sea coast and some time in Transylvania) and loved the food and the warm-hearted and hard drinking (“have some more palinca”).

As always, it is the freshness and quality of the local ingredients that make all the difference though Romanians also make some fine pickles (also one of the very few things that Russians do well (otherwise all of “their” food is actually Ukrainian). Anyway, there are literally several billion more people that really like garlic (and the other allium species like onions, shallots, leeks, scallions and others) thann those who do not.

I love your site! What kind of mustard did you use for the garlic cream sauce? Thanks!

Hi Gabriella. Thank you so much. The most common mustard, not hot, not sweet. Dijon is nice as well, but it's slightly spicier. If you like garlic, you will love this sauce, it's addictive.

When I saw a whole bulb of garlic I was immediately hooked! "Less" - no way. :) Wish I had a bowl of this sitting in front of me right now with a ag of chips. Thanks for sharing Adina.