Where Is My Spoon > Romanian Cooking > Zacusca – Romanian Eggplant Spread 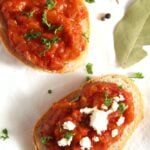 Zacusca recipe – the most popular Romanian spread made with roasted eggplants and red peppers (also known as gogosari).

Zacusca is something you are definitely going to eat if you ever decide to visit Romania. Maybe not necessarily in a restaurant, but if you happen to eat at somebody’s house, they will probably have a few jars of zacusca waiting somewhere in the corner.

So what is zacusca? It is basically a bread spread made every autumn by women all over the country.

The result is the BEST vegetarian/vegan bread spread you have ever tasted. And as you can make a lot of it and then preserve the jars you can enjoy this for quite a long time.

How to make zacusca?

How to prepare the vegetables?

How to cook zacusca? 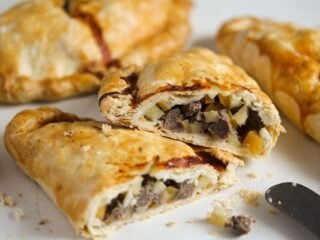 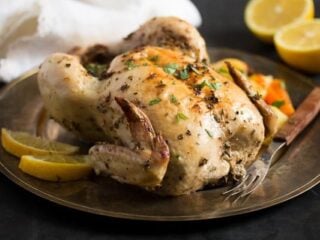 I was looking up what the heck “pimento” is. You know, that stuff they put in olives. Turns out, pimento (or pimiento) is gogosari! If you Google the word pimiento it pops up, and if that’s not a gogosar, I don’t know what is. My local farm has gogosari, and they actually label it as such because of a Romanian family who came in and saw them. Apparently, they were super excited to inform the owner that these are gogosari and now that is the label they have. Anyway, I’m really only sharing because my pimiento quest led me to gogosari, and then to your wonderful recipe for zacusca. I can’t wait to make it. And now that I see you are Romanian too, I am going to see if you have a recipe for musaca! :)

Hi Lily. So nice to read your comment. I've just googled myself, indeed pimientos look like gogosari, the ones I know are just knobblier, but they are sweet and succulent just like the description offered by Wikipedia for pimiento. I think you will love zacusca, I honestly don't know anybody who doesn't like it, either Romanian or not. Even the kids love it, despite the eggplants in it. :) And I do have a recipe for musaca as well, my grandmother's, the Romanian musaca made only with potatoes and ground meat. I hope you found it.

Well, then don't do it, it is entirely up to you. I have been making it so for over 15 years now and generations of women have done it like this for many years before me. My grandma didn't even have lids, she would seal the jars with some kind of thicker plastic foil.

Sheepnose pimento peppers are the actual name for "gogosari". I've seen them more often in the past years in the farmer markets (in Toronto area).

Good to know, thank you. The name is new to me. I wish I had access to gogosari again.

Hi guys, just wanted to share with you that you could also find gogosari under the name of tomato peppers...! Living in Montreal and being able to find those in the local markets sometimes, not always, and of course only in the fall...Cheers! Andra

Hi Andra. Thank you for the information, I hope it will help some people. Unfortunatelly I am too far away, I wish I could find some here. :)

We always make 3 typs of zacusca. The one with eggplants, with beans and with mushrooms. They taste differently but I like all of them :) We also make it in autumn, and multiple jars of each so this is a weekend activity for the whole family in the garden, it is sort of a tradition.

Hi Ana, zacusca is the best. I make it with some added mushrooms as well sometimes, but not too many jars because my children hate mushrooms and otherwise they love zacusca and I don't want to spoil it for them. :) I have made it with beans once and found it delicious, but I had the bad experience of all my 5 or 6 jars going completely bad in the cellar in less than 2 weeks. A catastrophy, the bean zacusca even started to ooze out of the jar.... :( Do you have a recipe for bean zacusca that keeps well in jars? Or do you only makes as much as you can eat in a short period of time?