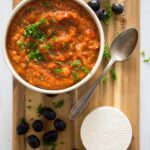 A simple ajvar recipe, one of the most popular Balkan foods. Smoky roasted red pepper dip with eggplants.

Ajvar with roasted red peppers and eggplants, a typical Balkan side dish or bread spread, perfect to make in summer when eggplants and red peppers are abundant.

The Balkans or the Balkan Peninsula is a vast region in southeastern Europe stretching from Bulgaria and the Serbian-Bulgarian border to the Black Sea coast.

During the 19th century, the term was synonym for the provinces of the Ottoman Empire in this area, having more of a geopolitical rather than geographical definition. The term of Balkan acquired a negative connotation during the Yugoslavian wars and the dissolution of Yugoslavia and nowadays the term of Southeast Europe is preferred.

Which countries belong to the Balkans?

This is a question I have asked myself often, but never took the time to actually read about it until now. I was never sure about my home country Romania, but now I know that only about 5% of Romania is considered to be part of the Balkans.

Countries that are 100% in the Balkans are Albania, Bosnia and Herzegovina, Kosovo, Bulgaria, North-Macedonia and Montenegro. Large parts of Greece, Serbia, Croatia and Slovenia belong to Southeast Europe or Balkans as well and only smaller parts of Turkey, Romania and Italy.

While many of these countries don’t have too much in common, one thing they do share is a similar cuisine.

Over the centuries, many nations “owned” parts of this region and left their imprint on the local way of cooking. It started with the Greek and the Romans thousands of years ago and continued with the Byzantines and the Turks.

Maybe the strongest influence on the Balkan food was the Turkish influence. The Ottoman empire ruled this area for many centuries and, if they did not manage to change the language or the religion in most of these countries, they did manage to introduce their cuisine just about everywhere.

Cabbage rolls – sarma or vine leaf rolls, stuffed peppers, chorba (sour soups), borek, sausages like cevapcici and many other foods are to be found in most of the Balkan countries. Vegetables like eggplants, red peppers, onions, and garlic are more popular here than in any other parts of Europe.

Meat is an important part of the Balkan cuisine, pork being the preferred kind of meat. According to some sources this preference for pork also “originates in the confrontation with the Turkish invaders. For many of them, meat banned for Muslims became a symbol of preserving one’s own identity and traditions.”

The popularity of pork is also due to the Ottomans not taxing or taking pigs from farmers. Pigs were considered unclean, so the local population was free to raise them without the fear of losing them or having to pay taxes. A similar thing happened with corn, which made polenta – mamaliga such a popular dish in Romania.

Balkan food was also influenced by the Hungarian cuisine (think of goulash and walnut rolls), by the Germans or Austrians (strudels or plum dumplings, for instance) or by the Slavic nations (Paska – Easter bread).

Just like the grilled sausages and sarma, ajvar is a Balkan dish popular in most of the Balkan countries. If you are interested in the Romanian version, here is our beloved Zacusca.

Ajvar is a dip, spread or sauce made with roasted red peppers. It often includes eggplants as well. Its origins are disputed, countries like North Macedonia, Serbia and Slovenia all claim to have created the recipe. Today’s version seems to be Albanian.

You will need red peppers, eggplants, onions, garlic, olive oil, and some spices like hot paprika and smoked paprika powder.

How to roast red peppers and eggplants:

You can prepare the peppers and eggplants in three different ways:

How to chop red peppers and eggplants:

Persian Eggplant Dip with Tomatoes – the Oriental version of the eggplant dip.

Muhammara Dip with Roasted Peppers and Walnuts– an Oriental version of a roasted red pepper dip, hot and so perfect, one of my favorite spreads ever.

Romanian White Bean Dip with Caramelized Onions – Irresistible bean dip or bread spread with garlic, one of the most popular Romanian spreads. 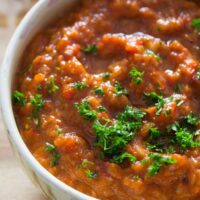 I think this tastes a bit different than the one you can buy here in Germany, but I like it better. Better suited as bread spread I think, the ready made one is more like a sauce, I use it mostly for casseroles and stuff like that.

YES, I love ajvar! Last time I was in Los Angeles at a big Middle Eastern grocery store, I bought a couple of jars to put in my suitcase :) Thanks for the reminder that I really need to make it myself!