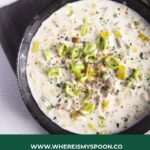 A popular German cheese and leek soup with ground pork, a thick and savory dish that everybody loves.

This German cheese and leek soup is one of my mother-in-law’s signature dishes, just like the German Beef Soup with Marrow Dumplings or the Salad “Torte”, that is: a dish I have eaten more often in her house than in my own.

It was one of the first dishes I have ever eaten upon arriving in Germany and, ever since, I have eaten it more often than I could count, not only in my mother-in-law’s house but in some of my neighbors’ and friends’ houses as well, most people I know make it on a regular basis.

This German cheese soup with pork and leeks is very easy to make, it needs only a few and cheap ingredients. Still, due to the cheese and meat, it is so extremely filling that one relatively small pot goes a long way, that means you can feed quite a few people with it, most of them will be full after one bowl and will not take seconds.

But not because it’s not good, it is absolutely delicious, no wonder it has been such a hit around here for more than 30 years now, my mother-in-law told me she got the recipe sometimes in the 1980’s.

Leeks are super popular in Germany, you can buy them at any time of the year, they are always huge and very cheap. I cook them often, if you like them, you should try this Romanian Leek and Black Olive Stew, it is amazing.

How to clean leeks?

How to make leek cheese soup with pork?

How to serve the cheesy leek soup?

This ground pork leek dish is a meal in itself, you will not need much on the side except some bread. You can serve it with crusty white bread, sourdough bread, or dinner rolls.

The dish is a very popular choice for party food in Germany. I cannot even count the many times I was served this at one party or another, it’s easy to make, very filling, cheap and everybody loves it!

The following ingredients are enough for about 6 people, but the soup can be easily doubled or tripled. You just have to find a pot that is large enough…

The recipe can be made in advance and reheated. 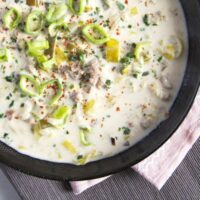 Hi, just wondering if you think this would freeze ok? Recipe looks good can't wait to try it. Thank you!

Hi Karen. I can't say for sure as I've never done it. I think laughing cow cheese is not suitable for freezing.

This was amazing. I’m American (and vegetarian) and used vegetarian “pork” sausage - blasphemy, I know - and it still turned out incredible. Great for a cold winter day!

I'm German living in Australia and I love German food

Hi Christiane. I hope you will find some recipes that you like. ??

Thank you for the feedback. :)I am glad you liked it.

What part of the country are you in that LEEKS are CHEAP?

I live in Germany. Leeks cost next to nothing, especially when in season.