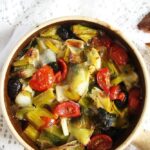 An incredible leek stew with olives, a classic Romanian stew recipe, which is healthy, vegan, and more delicious than you could probably imagine.

This leek stew is one of those real surprises for me when it comes to cooking. This Romanian stew – Praz cu masline – really blew me away, so much that I ate almost the whole dish alone. So much flavor, you really have to try it!

Leeks have a strange fate in Romania, while adored in the South where they have become almost some kind of local “emblem”, they remain quite unnoticed in the rest of the country. But leeks are extremely popular in Germany, you can find them anytime anywhere, and they are always super cheap.

So I cook quite a lot with leeks. Have a look a this Rice and Bean Soup or this Parmesan Frittata. I put leeks in any kind of broths or stocks I make (I keep a bag of chopped leeks in my freezer only for this purpose) and use them to make a delicious casserole with leftver German dumplings.

How to clean leeks?

There is only one thing I would like you to be aware of in case leeks are something new to you: leeks need to be very very thoroughly washed.

Dirt finds its way between the numerous layers of the leek, at the transition from the white part to the green part of the vegetable, so you will have to actually separate the layers and thoroughly wash the leek in between the layers.

The best method to wash the leeks is to slit the leek from the top to the bottom without cutting it all the way through and then carefully separate the layers without taking the leek apart while doing it and wash them under running water until all the dirt is removed.

What to do with leftover leek greens?

How to serve the leek and olive stew?

Serve as a main dish for two with only some bread on the side (and a nice glass of wine). Or serve as a side dish for four.

Serve with chicken, like this Cast-Iron Chicken Breasts, meatballs like these Romanian Meatballs or the Zucchini Beef Meatballs, with fish or Balsamic Roast Beef. 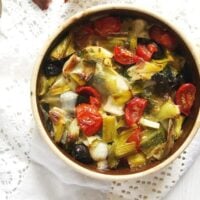 hi from Australia again - and happy Easter to you. I made this for part of an Easter Sunday lunch and it was really good. The vegan-food sceptics loved it as much as the vegans! My olives weren't particularly good quality - Spanish black olives were the only black ones i could get - sort of a bit dry. Would kalamatas be ok to substitute in terms of flavour? Thank you for the recipe :)

Happy Easter to you too, Heidemarie. I think kalamata should work, they have a good reputation. I've never used them for this dish though, the black olives in Turkish shops are always available in Germany and they are so good I rarely feel tempted to buy something else. I think the most important thing is that the olives are not pitted, they lose their flavour together with the pit.

This looks fabulous!!! Just bought a bunch of leeks just because they looked pretty. This dish is calling me.

This looks so tasty!

Marvellina |What To Cook Today

I love leeks too. Well, I'm not a fan of leeks when I was a kid but I love it now too. This stew looks so hearty

This sounds absolutely delicious! I love olives but I'd have never thought to put them in a stew! I enjoy leeks but often forget to cook with them. I'll be making this once the weather gets colder!