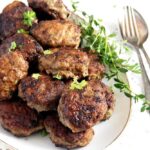 Romanian meatballs, also known as chiftele or parjoale: juicy, garlicky, full of herbs and flavor. Grandma-style pork and beef meatballs, one of the most popular Romanian recipes.

Meatballs are popular all around the world, I can imagine that there is hardly any country that doesn’t have a traditional recipe. These are the Romanian meatballs, the way my grandmother used to make them, the best chiftele ever! Of course, that is something every Romanian would say about their grandma/mother’s meatballs… But these are really amazing, trust me on that!

The recipe she used was originally a Moldovan parjoale (roughly translated as “burnt on embers”) recipe. My grandfather was born in the Romanian part of Moldova, so many of the dishes my grandmother cooked were typical for that region. Have a look at these Cabbage Pies, Branzoaice or Sweet Cheese Pies or Chicken in Cream Sauce.

What sets chiftele apart from other meatballs?

How to make Romanian meatballs?

Can you bake them?

Whenever I make these Romanian meatballs, which is quite often in our house, I tend to make too many of them. Why? Well, first of all, because we all like them so much, and secondly because I love to eat any kind of meatballs cold.

They are delicious on a slice of nice rye sourdough bread, smeared with mustard (this Homemade Orange Mustard is particularly good if you ask me) or chili sauce.

My grandmother used to make some extra every time not only so that we could eat them on bread the next day, but also to make Chiftelute marinate, which are meatballs in tomato sauce.

They keep well in the fridge for 3-4 days in an airtight container.

You can also freeze them for up to 3 months. Freeze them on a baking tray at first, so that they don’t stick to each other. Once frozen, place in freezer bags or airtight containers. Let thaw in the fridge and reheat in the oven.

More meatballs? I have so many! 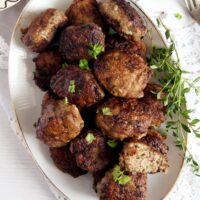 Or only ground pork.

How can you not love these meatballs? My grandma made them all the time, and I looove them with some mashed potatoes.

These look so delicious Adina. I'm intrigued by the different shape and the fresh herbs. Grabbing my fork! XO

Meatballs are my husband's favourite! I have never thought of using dill in meat...now I can't wait to try it. These look so very juicy and tender.