An easy to make rhubarb soup – tangy, aromatic and topped with bacon omelet. An amazing way of using rhubarb this spring.

You will not believe this soup! I have had rhubarb in savory dishes many times before (have a look at this Chicken with Rhubarb Sauce or this Chicken Green Curry with Rhubarb for instance), but I have never made a rhubarb soup before.

I did not even know it was possible. I never saw a recipe for it, it never occurred to me to make rhubarb soup or to look for a recipe.

But then we had some people from Romania visiting us this spring. They saw me coming from my friend’s garden with my arms full of huge rhubarb stalks and they both exclaimed simultaneously: “Oh! Are you making rhubarb soup?” And me: “Ha? No… Rhubarb soup, I have never heard of it! I am just making jam.”

They told me it was a soup traditionally eaten in their region, every spring you would have this rhubarb and tomato soup at least once. They could not really give me a recipe, they just roughly explained to me, what I should put into it. They told me it was a pork soup with tomatoes and bacon.

I was immediately curious! I searched for a recipe online and I have only found one rhubarb soup recipe in Romanian.

I found a few more recipes in English, recipes for rhubarb and lentil soups, they all sounded amazing and I am definitely going to try them some day, but for the moment I wanted to make the Romanian version of a rhubarb soup.

Apparently, it is not a purely Romanian recipe, but more a recipe inspired by the German population living in Romania – the Saxons. They live mostly in Transylvania and it is only in this region that rhubarb is actually eaten in Romania. The Saxons introduced rhubarb to the Romanian population and you will have a hard time finding any rhubarb recipe in any other region of Romania.

And if you would like to see more delicious Saxon recipes, have a look at this Poached Chicken in White Sauce with Raisins and Rice or this Stewed Sauerkraut with Meat Dumplings. And in autumn, you should definitely give these Pumpkin Fritters a try, they are to die for.

HOW TO MAKE RHUBARB SOUP

What stock to use for the rhubarb soup?

The original Transylvanian rhubarb soup is make with pork. You should actually cook some meaty pork bones and use the stock to make the soup. However, I do not often use pork to make stocks, it is not that I don’t like it, but I do like chicken stock better.

We also eat way more chicken than pork, so I always have some leftover roasted chicken (or turkey) bones in my freezer. This way, it is easier for me to make and use chicken stock for soups. But if you happen to have some pork stock in your freezer (or even beef), that would do as well.

A good quality bought chicken stock is fine as well, use your favorite brand.

Or you could keep this rhubarb soup vegetarian by using vegetable stock and replacing the bacon with some finely chopped spring onions or fresh herbs in the omelet.

This is a very easy recipe, but there are two different things you have to cook: the soup itself and the bacon omelet.

Most soups in Romania are sour soups, we like to add vinegar, lemon juice, pickled tarragon or fermented wheat to our soups to make them sour. In this case, we use rhubarb to sour the soup. But what makes this soup so special is not only its sourness, but that amazing specific rhubarb sour flavor.

You will be surprised of how much you will like this soup, it was one of my best recipe discoveries this year and I know that I will make this soup every spring as long as I live.

Fresh lovage is a wonderful herb, very much used in Romanian cooking, perfect for hearty soups. Unfortunately, I have never seen it fresh in a supermarket in Germany, so I only use it in spring and summer when it grows in my garden. Otherwise I use dried lovage.

If using dried lovage add it to the soup together with the paprika powder and chicken stock. If using fresh lovage, chop it finely and add it to the finished rhubarb soup.

HOW TO MAKE THE BACON OMELET

So, you have this rhubarb soup now, which is already wonderful as it is. But to make it even better and a complete meal, you make a quick omelet with some slightly smoked bacon pieces in it and you bring the soup to a whole new level.

And all that in about 30 minutes, 40 minutes tops! A delicious and healthy meal, that you will probably end up telling everybody you know about, just because it was so special and so unexpectedly good.

1. You can use pork stock instead.

2. For a vegetarian version use vegetable stock. Replace the bacon in the omelet with finely chopped spring onions or fresh herbs.

3. Not tomato paste or tomato sauce. Tomato puree or passata is uncooked pureed tomatoes. You can also blend the same amount of canned tomatoes until smooth.

4. If fresh lovage is unavailable, it can be replaced with 1 teaspoon dried lovage, which should be added to the pot together with the stock. 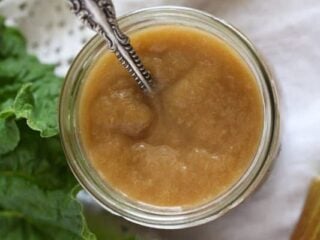 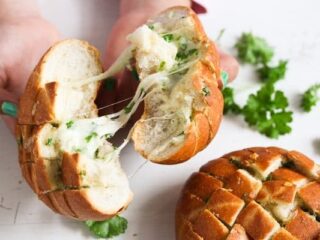 I make a homemade tomato soup from tomatoes in my garden. Instead of using the tomato puree, do you think I could lessen some of the other liquids and use my usual tomato soup recipe, and add in rhubarb? I've been looking for savory rhubarb recipes and hoping this might work out!!

Hi Emily. I think anything is possible when cooking. Making the tomato soup from your own tomatoes sounds delicious, I suppose you can use it as a base for the rhubarb soup. Let me know how it worked out.

Thank you for the rhubarb soup inspiration! Had an abundance of misc. veggies to use up, including a lot of rhubarb. With only 2 TBSP of tomato paste in the house, I also used the beet powder in my smoothie cupboard to make a lovely borscht like broth. Left my vegg chunky & served with Greek yogurt. Love, love, love rhubarb in soup!!!

So happy to hear it, Lisa. I have never had beet powder, but I am sure it tasted good. And looked very pretty for sure! :) Thank you for the feedback!

It's probably the most original way to use rhubarb I've ever seen! I love rhubarb and all the tangy/acid food, so I'm sure I'd love your soup too.

I have never tried rhubarb in savory dishes yet, but this looks and sounds so good!

That looks awesome. Saving it here as "recipe to try this week", thanks!

Thanks Kelly, I hope you like it, it is really something special. :)