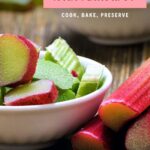 Learn how to use rhubarb: how to clean it, store it, preserve it. And how to use it in cooking and baking. Lots of rhubarb recipes, either sweet or savory, this plant is incredibly delicious and versatile.

Did you ever wonder what to do with a glut of rhubarb? Are you stuck with baking the exact cake over and over again? Here you will learn everything there is to know about cooking, baking, or preserving rhubarb. And just in case you are wondering what kind of cake I bake repeatedly, it’s this simple and comforting Rhubarb Crumb Cake.

A herbaceous perennial plant growing in cooler climates. Its origins are unknown, but what is know is that the plant was primarily grown for medicinal purposes before the 18th century. Then, during the early 18th century, people started growing it as a vegetable, mainly in England and Scandinavia.

It can be pink, green streaked with pink, or completely green. When searching for a recipe, you will see pink images of jam or desserts, while those on this blog are primarily green.

The reason for that is that I use the stalks of a standard green (slightly streaked with pink) plant growing in my neighbor’s garden. I would never dream about buying the pink supermarket stalks just for the color when there is so much growing wildly next door.

Botanically, rhubarb is a vegetable, meaning it consists of roots, stalks, and leaves (while fruit is supposed to have seeds).

However, legally (in the US), the plant was classified as a fruit in 1947. The reasoning behind it was that people use it mainly to make cakes, desserts, and jams. This way, importers would pay fewer taxes when dealing with rhubarb than they would pay if the plant would have been classified as a vegetable.

The stalks are edible, but the leaves are poisonous. They contain oxalic acid, which is toxic to both humans and animals. Eating several pounds of leaves (!!!!!) will cause stomach pain, nausea, diarrhea, and vomiting. But who would eat that?

The plant has a short season in spring; try to make the most of it! Depending on where you live, you can pick it between April and the end of June.

How to pick rhubarb?

How to prepare it?

How to store rhubarb?

You can store the whole stems in the crisp drawer of the refrigerator. Or chop the plant first and store it in airtight containers in the fridge. It will keep for up to 4 days.

How to preserve rhubarb?

How to Cook with Rhubarb?

Rhubarb is an incredibly versatile plant when it comes to cooking. You can use it like you would any other fruit and make desserts and cakes. Or you can cook savory rhubarb dishes.

Cooking rhubarb in a savory way:

The rhubarb season is almost to an end, but I will keep adding a couple of recipes now and, for sure, quite a few of them next year as well. So, if you love rhubarb as much as we do, do give some of these recipes a try; you will not be disappointed. And I would love to hear some feedback! 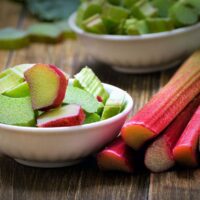 It’s nice, but leave it out if you don’t have it.

Was hoping for a bumper crop of rhubarb this year, but the high heat hit early and it just couldn't handle. Got enough for a cobbler, but sure wanted to try my hand at a jam. May be next year. Great ideas for rhubard.

I make rhubarb bbq sauce and can it

It sounds delicious, I should try that too.