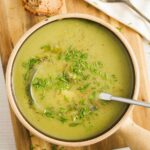 A filling Irish potato soup, making soup can hardly get any easier or cheaper. This traditional recipe uses just a handful of ingredients like potatoes, leeks, and milk, yet the result is rich, creamy, and completely satisfying.

Make this super simple and delicious Irish potato soup with leeks, it’s perfect not only for celebrating St. Patrick’s Day but for any day of the year and especially during the cold winter months. This easy potato soup is one of those great recipes that you can make any time with just a few pantry and freezer ingredients.

Ireland and potatoes. Even if you don’t know much about the country, you probably think of potatoes when you think about Ireland. And the Irish potato soup is probably the most cooked potato dish in Ireland… Together with the Colcannon, I suppose, I think I’ve seen even more recipes for the Irish potato and cabbage dish than I’ve seen for potato soups.

The potato was introduced to Ireland sometime during the 16th century and its cultivation spread quickly. Potatoes soon became a staple food for the rural population in Ireland.

Fun fact: they were not very popular from the very beginning, one reason for it being that the clerics considered they come from the devil! The reasoning behind it was that they grew underground.

The potato is also the main reason why people with Irish origins are so widely spread all over the world, especially in North America. The Great Potato Famine, which lasted for 3 years during the 1840s caused the death of millions of people and the emigration of some more million.

What are the best potatoes to use for soup?

How to make Irish potato soup?

Can I cook the Irish soup in the slow cooker?


Place all the prepared ingredients, except milk and cream, in the slow cooker. Cook on low for 6-8 hours or on high for 3-4 hours, or until the potatoes are completely tender and cooked through. Blend as instructed, add milk or cream, and seasoning.

Can I make this vegetarian?

You can easily make this recipe vegetarian by using vegetable stock instead of chicken stock or vegan by replacing the butter, milk, and cream with vegan alternatives.


The Irish potato soup keeps well in the fridge for about 3 days. It tastes even better the next day when reheated.
I don’t recommend freezing this rustic soup, frozen and defrosted potato dishes are not good, at least I don’t like them at all. 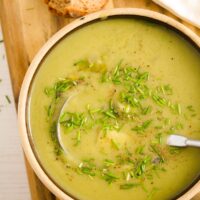 Was Easy and Delicious , easier than most other Potato and Leek Soups and enough for 2 People

I am happy to hear it, Sonia. Thank you.