Only three ingredients, less than half an hour cooking time and there you have it: delicious and comforting Macaroni and Cheese (with or without sugar), Romanian style.

Macaroni and cheese, comfort food all around the world, there must be a billion recipes and variations out there. Why another one? Well, I am beginning a new series on Where Is My Spoon today, the last series of 2017 and the last series in this One Year of Romanian Cooking. And this last Romanian Recipes Series deals with my childhood recipes, my grandmother’s cooking, her best recipes or at least those dishes that I loved most as a child. 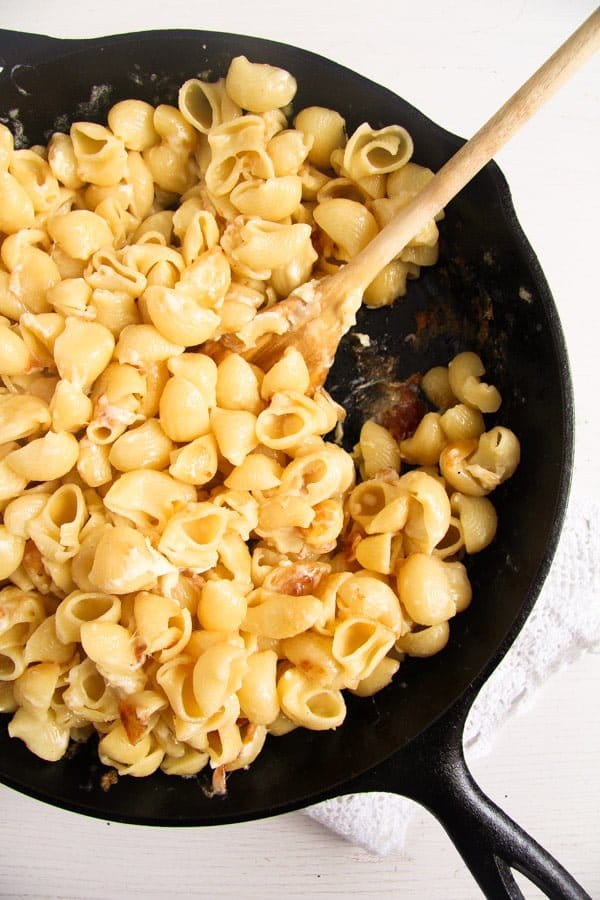 Of course, there are more of those beloved recipes than the ones I will post during the next two weeks. But many of them I have already posted during the last three years, so I will not post them again. Some of those are the amazing Sarmale – Traditional Romanian Cabbage Rolls with Pork and Rice, Romanian Roasted Aubergine/Eggplant Salad – Vinete, Romanian Pea and Chicken Stew, The Easy Hungarian Chicken Paprikash with Dumplings, Moldavian Pork and Beef Meatballs with Herbs – Parjoale and so on.

Today’s Easiest Skillet Macaroni and Cheese are one of my favorites as well. We didn’t have noodles often in Romania during those times, actually I can only remember eating noodles in three variations: these macaroni and cheese or the unbelievably overcooked noodles as a side dish for a meat stew, so overcooked that I would be able to turn them to a paste by barely touching them and milk noodles, which I loved but which I didn’t get to eat often because my grandmother hated milk.

But she did make macaroni with cheese often. She used to work full time up until she was quite old and this particular dish was so easy to make, so quick and so cheap, it was easy to make it again and again when time and money were short. And she would be sure I would always be happy if she made the noodles. 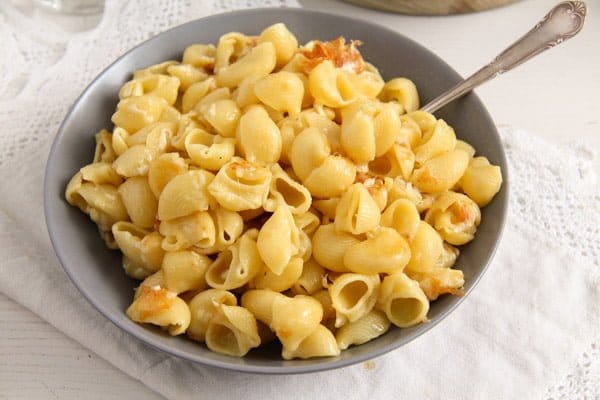 How to make the The Easiest Macaroni and Cheese – Romanian Recipe

Well, it is very easy. Cook the noodles according to the packet’s instructions, drain them, give them to a cast iron pan, mix them with the grated cheese and fry them in a bit of oil until you get those crispy and delicious golden brown spots here and there. That is the big secret of my grandmother’s Macaroni and Cheese: those crispy brown spots, the contrast between the soft comforting noodles and those crunchy and hearty brown spots! And the sugar – the contrast between the salty cheese and the sweet sugar!

The sugar that you will sprinkle on top when serving the macaroni and cheese. Well, that is so to say, optional, but so good! The combination between the salty feta style cheese (or the Romanian telemea cheese) and the sugar is just delicious. Of course, try it first to see if you like it. I grew up with it and I adore it, but don’t sprinkle your whole plate of macaroni and cheese with sugar before trying it first on a smaller portion.

I am sure your kids will love macaroni and cheese sprinkled with sugar, this is definitely children food. 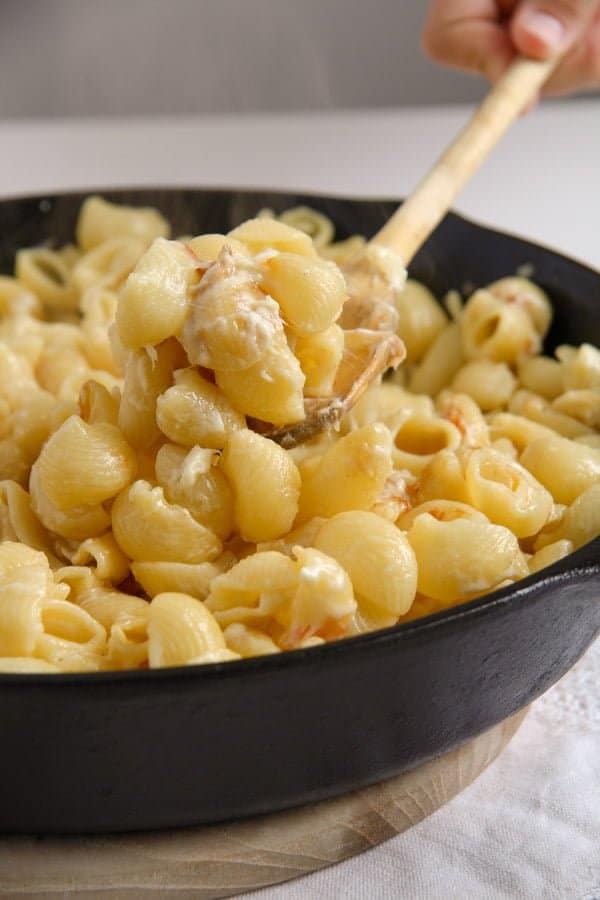 My grandmother used to always make macaroni and cheese with telemea – that is a Romanian kind of feta cheese, made of cow’s or sheep’s milk. It comes in big white blogs and has different degrees of saltiness and creaminess. I used to love the creamier, saltier kinds, but I haven’t had real Romanian telemea in years actually. So I use feta cheese instead, sometimes the cow’s milk telemea that can be bought in any supermarket, sometimes the better sorts White Cheese (Feta) – 1.1lb

I can buy in the Turkish shops.

Whatever you use will be fine and if you don’t want to use feta at all, you can use Gouda or Cheddar cheese instead. I’ve done it and it tastes great! I have cooked this dish with different kinds of cheese rests I found in the fridge as well. It is cheese after all, you cannot really go wrong!

And for a really authentic grandmother’s dish, use elbow macaroni – melcisiori, my grandmother never ever took any other sort of pasta for her macaroni and cheese. 🙂 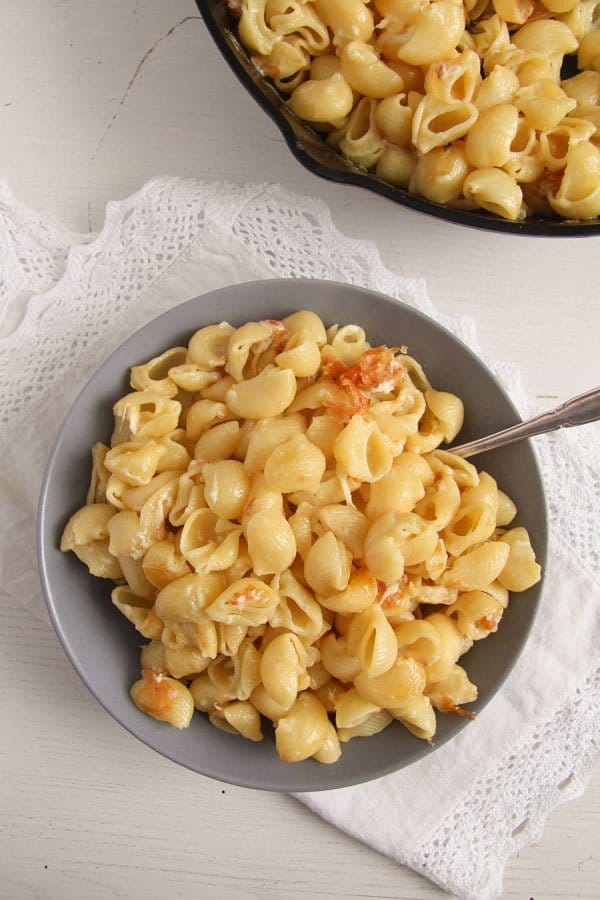 Stuffed Peppers with Beef and Rice 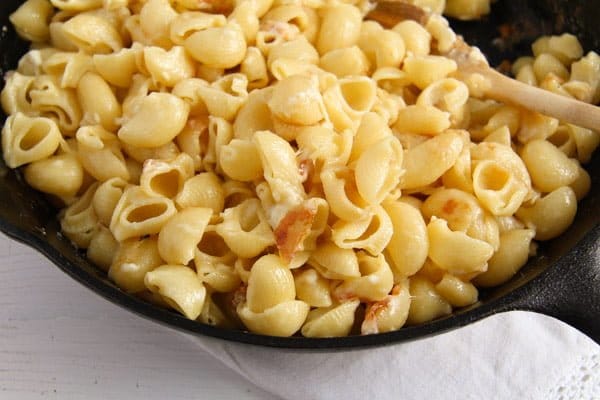 Instead of feta or Romanian telemea, you could use most any other kind of cheese, I have repeatedly made this dish with Gouda or Cheddar as well. Sometimes I also mix different kinds of cheese rests I can find in the fridge.

Bring a large pot of water to a boil. Add a large pinch of salt and the noodles. Cook the macaroni according to the packet's instructions. Drain.

In the meantime grate or crumble the cheese.

Heat the oil in a large cast iron skillet or another large pan. Give the noodles and the cheese to the pan and mix very well. Add some salt, if the feta you use is not very salty or if you use another kind of cheese.

Serve immediately either plain or sprinkled with sugar. Try the sugar version on a smaller portion to see if you like it. If you do (which you probably will) add more.

Cream of Asparagus Soup with Milk

I love that this is so easy. It looks incredibly comforting as well.

Thank you, Laura. One of my favorite childhood dishes!