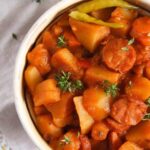 Delicious potato and sausage stew with vegetables, a hearty meal ready in no time, a comforting dish to warm you up in winter.

Like the Easiest Skillet Macaroni and Cheese, the Simple Chicken and Vegetable Pilaf and the Easy Pork Meatballs in Tomato Sauce, today’s potato stew with sausage is another staple in my grandmother’s kitchen and in the Romanian kitchen generally.

Potato stew or Tocana de cartofi is something you will never find on a restaurant menu, but it is something you will get to eat in every single household in Romania, even the name tocana de cartofi has for me such a strong meaning, it is almost like a word in itself, describing something so stable and so natural, so obvious, almost like a word naming a thing like a bed or a table etc. Am I making any sense?

However, unlike all the previously mentioned recipes, which were my grandmother’s originals, the recipe for this sausage and potato stew is not really my grandmother’s. I liked her version and I make it from time to time as well, but not too often. Instead, I prefer my own version of the potato stew.

HOW TO SERVE POTATO STEW

Butternut Squash and Sausage Stew in the Cast Iron Pan 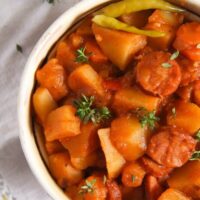 Kielbasa, Spanish chorizo (not hot), or andouille would be fine. I've already made this potato stew with frankfurters, chorizo, typical German sausages like bratwurst, grilling sausages or other smoked sausages.

I made this stew for my boyfriend and me this past weekend and it was delicious! I've had a few dinner failures lately and this dish put me back on track. Leftovers were eaten by all. Thank you!

I am so glad to hear it! Thank you for the feedback.

Though I made it pretty poorly, it was still quite delicious! Thank you!

Mmmm. This looks and sounds delicious with the sausage, which adds so much flavor. How lucky you are to have so many wonderful recipes from your grandmother. So fun to be able to take her original recipe and add to it. I hope you and your family enjoy the holidays.

My grandma did not really have many recipes, but I am glad I managed to get most of my favorites before it was too late. But no matter what I do, I always think that those recipes tasted much better when she cooked them than when I cook them. :)

Perfect for the cold winter days! Happy holidays and Merry Christmas to you and your family!

Merry Christmas to you too, Katerina.

It is really comforting, something for the cold days. :)