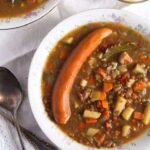 Traditional German lentil soup with potatoes, vegetables, and sausages, this Linsensuppe is one of the best German soups there is.

There is no other German soup that I have eaten more often than this lentil soup with potatoes and sausages.

It was one of the first soups I have eaten in Germany and the one German soup I have been cooking like a million times ever since.

Of course, there is always the Romanian Chicken Soup with Dumplings, which is our absolute number one and which I cook at least every two weeks or so, but otherwise, in terms of frequency, this potato lentil soup must be number two.

And why? Well, first of all, it is absolutely delicious, it is very easy to make, sooo cheap and one of my husband’s favorite soups, I think his mother used to cook it even more often than I do when he was a child. And it was the first soup that I have ever cooked myself, so it holds a special place in my heart as well.

I have cooked this potato lentil soup so often, I really don’t need to follow a recipe anymore. I got the original recipe from my mother-in-law long ago, but over the years, I have changed that to fit our taste better, I lost the Maggi she used, added some vinegar and a bit more vegetables.

CAN YOU REHEAT THE GERMAN LENTIL SOUP?

The potato lentil soup can be easily reheated, it actually tastes even better the next day.

If you’ve already sliced the sausages and added them to the soup, leave them in there, it will not matter, they can be reheated as well. Otherwise, reheat fresh sausages separately before serving.

The German lentil soup makes a great party soup. The quantity can be very easily increased (I cooked this once for about 15 people), the soup can be made in advance and it can be easily reheated.

So, if you would like to try a really typical German soup, the perfect winter soup, do give this potato lentil soup with sausages a try, I am sure you will love it.

HOMEMADE CREAM OF MUSHROOM SOUP – homemade cream of mushroom soup without cream or lots of butter, just some cream cheese to make it really smooth and comforting. Goodness!!! I lived in Germany most of my life and was so excited to try this. While it was boiling for the first time i already recognized the wonderful smell. I couldn't find the right sausages so i got a smoked sausage, sliced it up and added it after adding the potatoes. I'm so happy, thank you for the wonderful recipe!!! Sadly my Maggi was empty and i couldn't find any at the store today. But the balsamic vinegar helped to bring a lot of the flavor out more.

Will this be ok to freeze? My boyfriend is out of town til Saturday or Sunday and he doesn't know if he'll like it so i would hate making another batch (this turned out to be a lot) and he doesn't like it

@Adina, thanks so much for the quick response!

Hi Jenny. Thank you so much for the feedback, I am so happy you liked the soup; it's one of my favorite German recipes. You can freeze it.

Girly who would have thought that a Romanian lady living in Germany could teach a German lass living in England how to make a decent lentil soup! I've just discovered your blog and I love it already. My Mister is a Scotsman, and since getting together with him I've dug up a lot of recipes I used to enjoy as a kid when my grandma cooked up a storm every day. By now he knows more about German food than the average German :) I'll be sure to visit your blog frequently. Keep those recipes coming! Love from Leeds, Steff xx

Such a nice comment to read, Steff. Thank you! I am glad you like the recipes. My husband goes crazy for this Linsensuppe, just the way his mama makes it too! :)

We have -8 C degrees outside ...:) Hot soup sounds just amazing and very good idea :) Thank you for inspiration!! :)