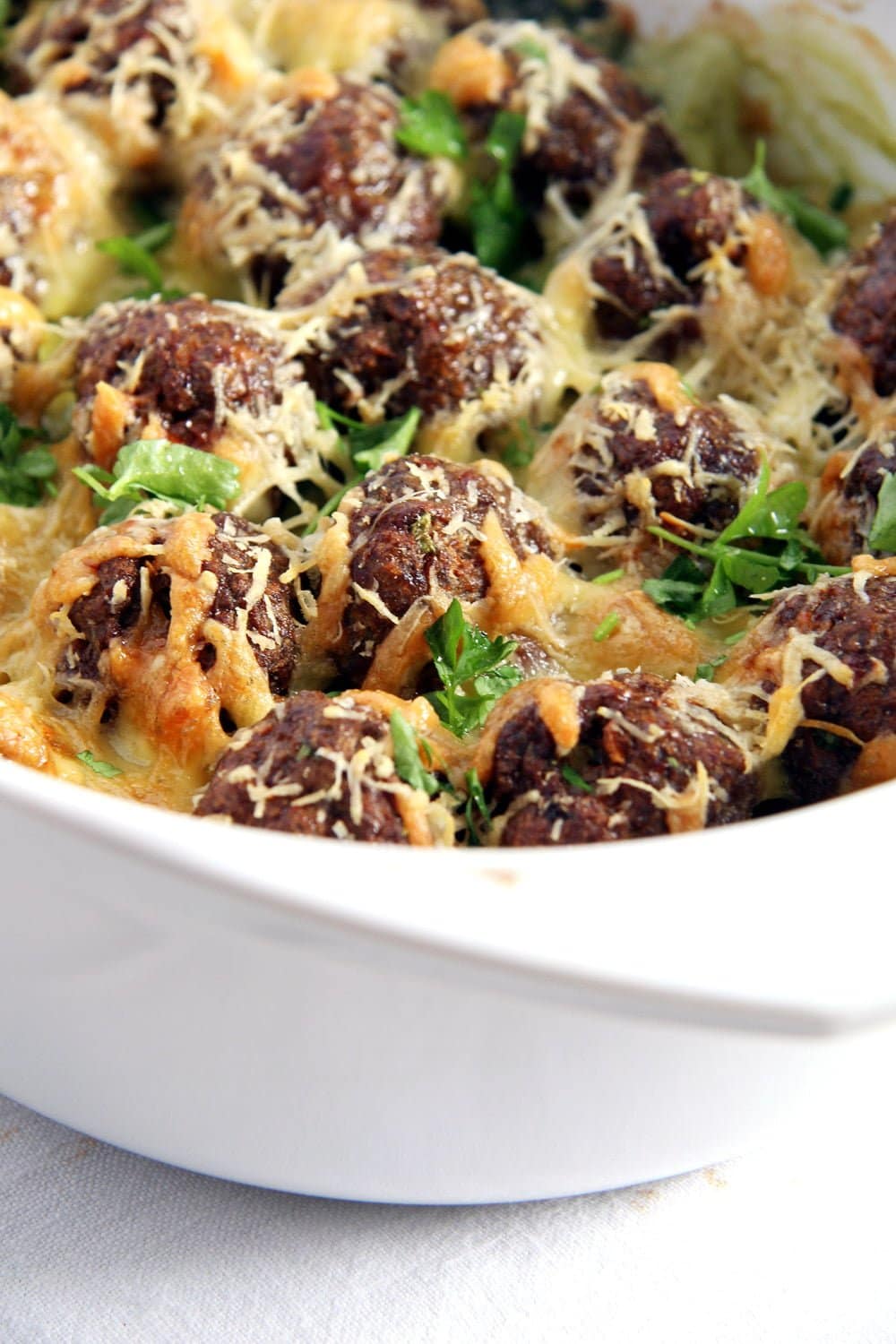 A layer of potatoes, one of spinach, meatballs and cheese: all combined into one dish. What could you want more?

I am not sure I could call this recipe a typical Romanian one, at least it is not something I have ever eaten in my grandmother’s house, but like I have mentioned a few times before, my grandma was not exactly a pioneer in the kitchen, she knew her dishes well and cooked those perfectly but never considered trying anything new or even changing one thing in at least one of her dishes. 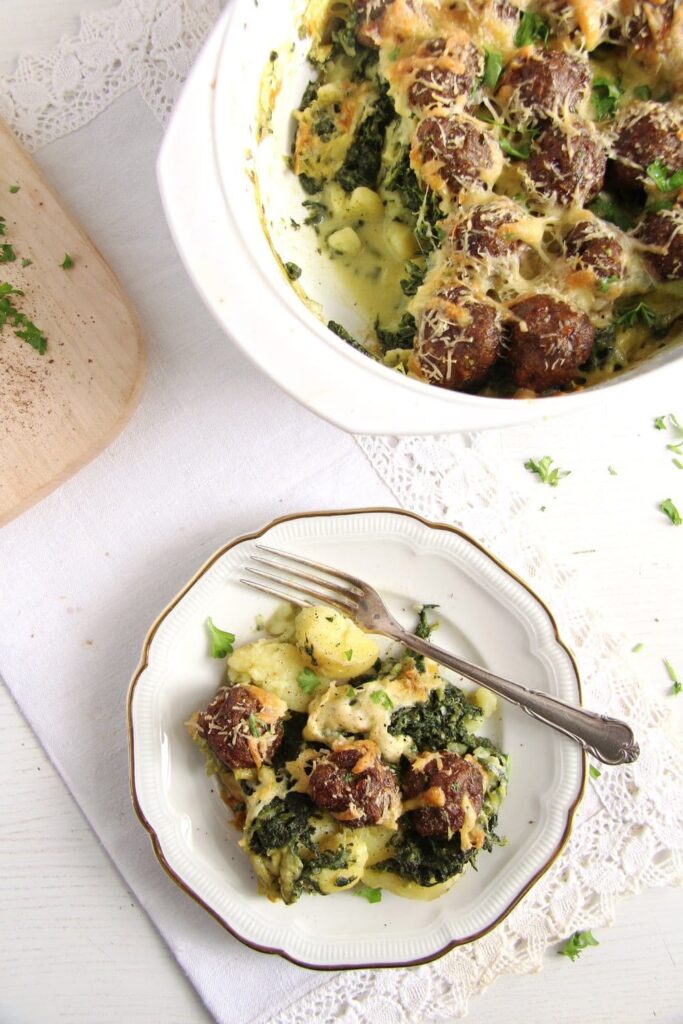 She either had exactly all the ingredients she needed for a dish or she would make something else, replacing or leaving out something was not an option, every dish had to taste exactly the same every time she made it or it was not good. This was also the main reason she would almost never eat in other people’s houses, their also typical Romanian recipes would differ slightly from her own, hence they were not good and those people (including her own daughters and sisters) didn’t know how to cook. She was quite difficult to please, I am telling you.

This is probably the reason I am so willing to try any kind of food, the reason I have so many cookbooks and why, with some exceptions, I rarely cook the same recipe again and again. I like variety and although I liked my grandmother’s cooking a lot when I was growing up, I remember myself when I was about 16-17 and she wanted to make sarmale/cabbage rolls again for like the 4th time in 2 months (one of my favorite dishes actually), that I’ve told her “Sarmale? Not again!!! We already had that last week! Make something else”. Her answer was: “What else can I make, I have already bought the meat and the cabbage?” Main point: she could not even conceive that there might be another way of combining cabbage and ground meat into a new dish. 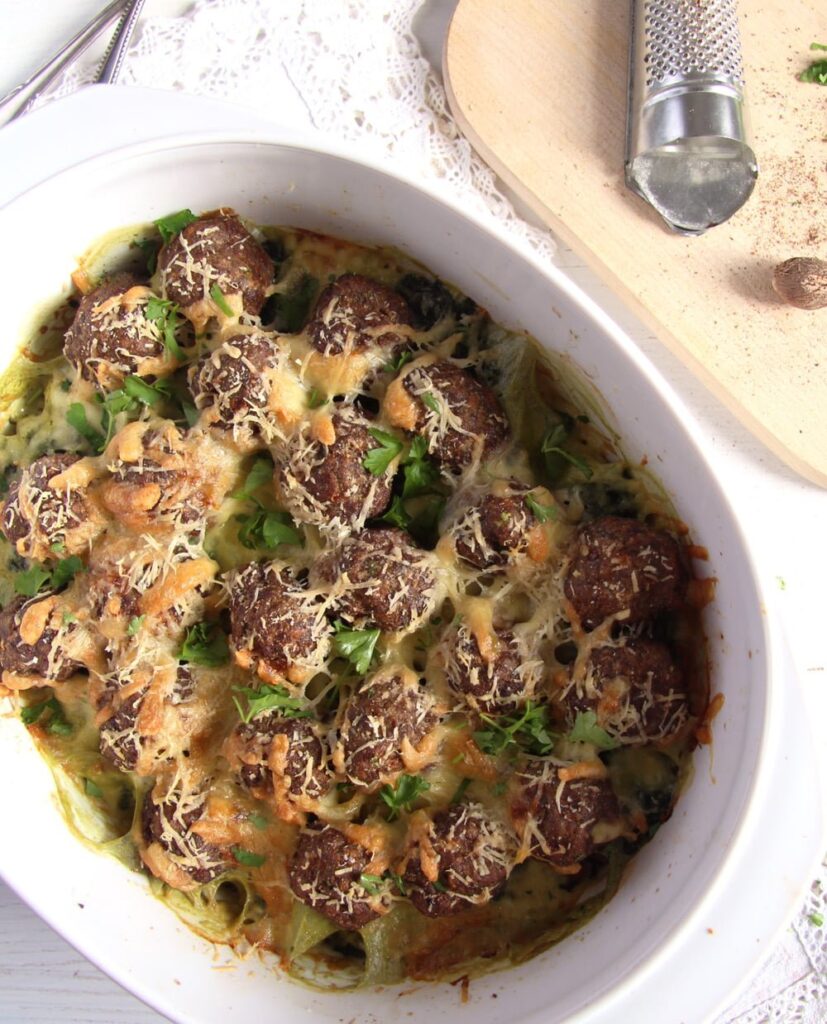 So a casserole dish containing potatoes, spinach, meatballs and CHEESE (imagine that – putting cheese on top of meat and melting in the oven!!!! Preposterous!!!) would be something my grandmother would never have eaten if you paid her to do so. She would probably have rather gone hungry for 3 days instead or would have eaten only dry bread while watching us eating the casserole and thinking we are completely insane and have no idea what good food actually is.

Luckily, I don’t have this problem with my lot now, they do enjoy eating all kind of different dishes and a casserole with cheese on top is always a winner. I used fresh spinach to make this Cheesy Spinach Meatball Potato Casserole, but if all you have is frozen spinach, don’t worry about it, it will work just as well. Just thaw and drain it first. But make sure you buy some frozen spinach where the leaves are not chopped into tiny fragments, I really don’t like that kind unless I want to puree the spinach anyway. The fresh spinach leaves should also not be chopped very finely, if they are small leave them whole, if they are large, slice them roughly two or three times. I stirred some smetana into the spinach, but you can use crème fraiche, sour cream or cream cheese instead. 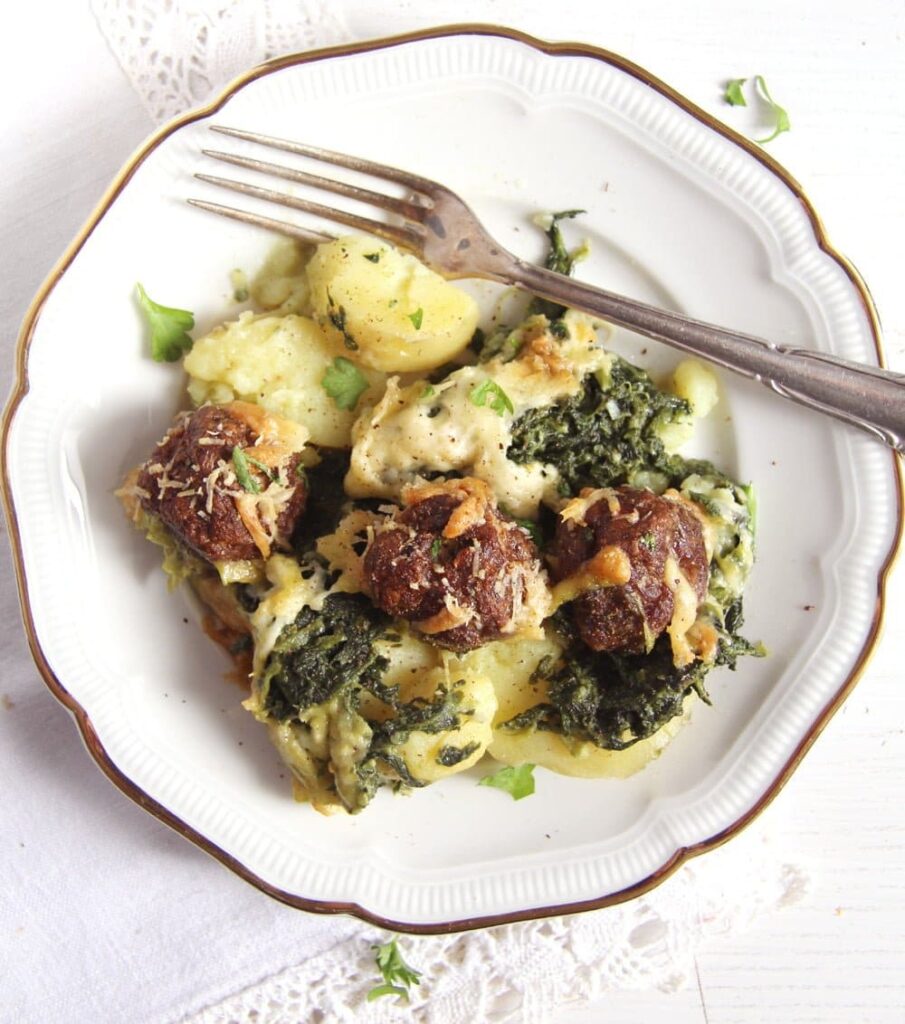 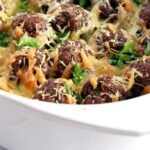 Cook the potatoes, let get cool enough to handle, peel and slice them into rather thick slices.

In a bowl mix together the ground meat, dry breadcrumbs, 2 of the garlic cloves – grated, egg, mustard, sweet paprika, salt and pepper to taste. Form about 20-25 meatballs, place them on the prepared baking tray and bake in the oven for about 12-14 minutes, they should not be raw in the middle anymore, but still remain soft and juicy, they will be cooked longer in the casserole dish itself.

Remove the stalks of the spinach and chop it very roughly, only if the leaves are very large. Heat the oil in a large pan, add the spinach and let it wilt shortly. Add the vegetable broth and cook for about 5 minutes. Add the remaining 4 cloves of finely sliced garlic and continue cooking for another 5 minutes, stirring from time to time, or until the spinach is cooked and most of the liquid has cooked down. Stir in the smetana or crème fraiche. Adjust the taste generously with salt, pepper and nutmeg.

Place the sliced potatoes in the prepared casserole dish, give the spinach on top, arrange the meatballs over the spinach and sprinkle everything with the freshly grated cheese. Bake for about 35-40 minutes or until golden brown. 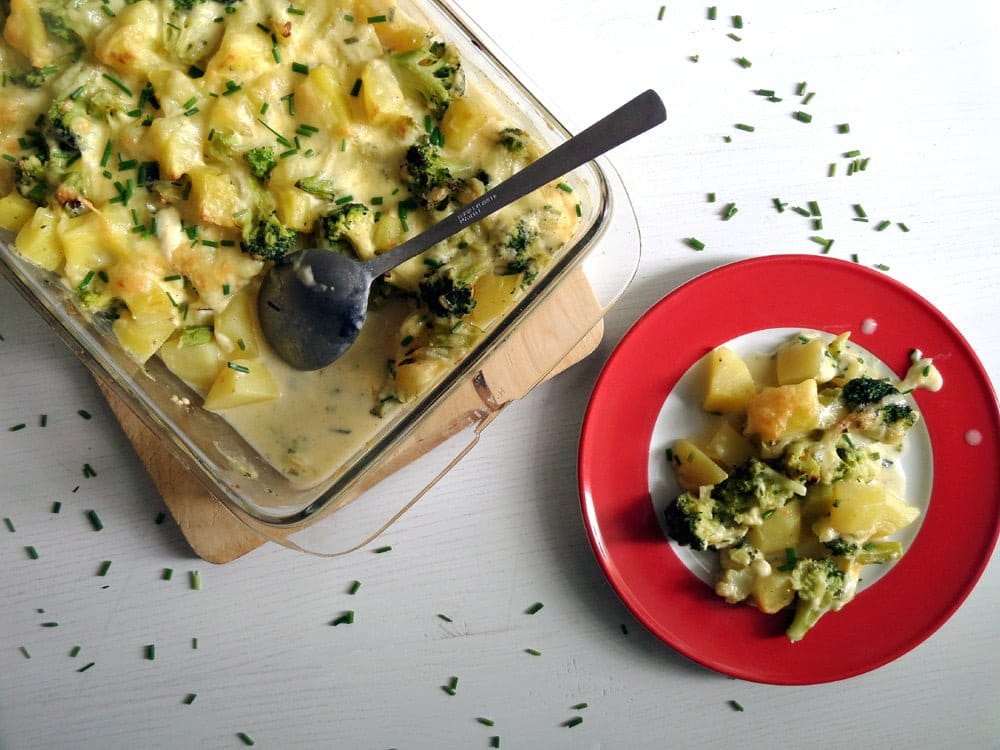 It looks like a perfect family weekday meal! And I bet it is good reheated too…
I think my grandmother was like that too… she never changed her dishes and even if she was happy to discover new food at other people’s houses, she would never make anything new herself.

Your grandmother definitely seems quite traditional! Too funny about the sarmale recipe story!! If I make a recipe, like you, I’m not too particular of replicating exactly the same way the next time I make it. If I don’t have an ingredient, I have no problem using a substitute or leaving it out; I guess that’s one way of discovering new things, right? Plus, you kinda have to be a bit flexible in the kitchen, right? Use what you got, I say. This recipe looks delicious!! You can’t go wrong with spinach, meatballs and a whole bunch of cheese if you ask me. And, then carby potatoes? I would have a hard time turning this one down 🙂

Oh goodness, now THIS is how you casserole!!! Spinach, meatballs, potato and cheese ALL in one pan?! GIMME THAT! I could seriously eat this daily, girlfriend! Looks amazing! Cheers! <3

Mmmmmm beef! I am so craving beeffffff right now!

Your grandmother sounds like she was quite a character and you have so many fun memories of her. I love that, although you definitely got her gene for cooking, you’re willing to try so many new and interesting things! This dish looks wonderful.

Oh wow! Your grandmother sounded like mine. Love how dreamy and delicious this spinach meatball potato casserole looks and sounds. This would surely make a lovely weekend meal.

i was surprised to see potatoes in this casserole, but it’s a great idea! this looks like a hearty and nutritious meal. 🙂

Oh my! This casserole is right up to my alley! I’m sure my family will devour it.

This is SO funny. I didn’t know WHAT to make for dinner. I trawled through my freezer and fridge and found (somewhat old) fresh spinach and uncooked frozen meatballs. There were also 3 baked potatoes left over from yesterday. I wrapped the defrosted meatballs in the spinach leaves, sauteed some onions, bunged in a packet of roasted red pepper pesto, garlic, tinned, whole peeled tomatoes, some herbs and a few other bits and bobs and pureed everything. Sliced up the potatoes and put them round the side of the dish. Poured the sauce over the meatballs and sprinkled the cheese on top. It’s in the oven now for 30 min at 180+ degrees. Then I came and googled my ingredients. I found this recipe of yours!one – it looks like challenged cooks think alike! Can’t wait.

So funny, Jennifer. Some really yummy recipes are born from cleaning out the fridge. 🙂

Hello Adina, this is so true. This family recipe of yours was REALLY yummy. After 30 minutes it wasn’t heated thoroughly and the meatballs were slightly underdone, so I put it back for an additional 15 min. My family gave it a thumbs-up and asked me to make it again. My mom also uses the same recipes over and over again. It’s not that she is a bad cook per se, she just lacks imagination and that’s why she sticks to her “tried and trusted” recipes and seldom deviates from them. The one thing that she does that drives me absolutely crazy is the way she handles meat – it all has to be cremated! I think I started to learn to cook at a young age in self defence.

🙂 🙂 I remember begging my grandma to cook something else for a change, the look of disbelief on her face… She could not even imagine that there was more good food in this world except for what she cooked! She asked, “What on Earth should I make??” and that was it!