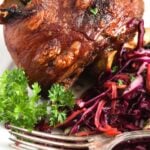 If you ever want to try a typical Bavarian dish, then these pork hocks with crackling are the thing for you! One of the heartiest dishes you can imagine, chunks of incredibly tender meat, juicy and full of flavor. And the extra bonus: crispy skin! For more crispy pork, learn How to Cook Pork Belly Slices.

This is a traditional German recipe; simple, using just a few, rather cheap ingredients, relying on a good piece of meat from the butchers. There is not even need for a sauce, the dish is already so rich and juicy, a sauce would only add calories without contributing much to the story.

What you need on the side is a fresh, crisp salad to clean up the palate between the bites. And definitely a cold German beer.

And if you would like to try more thoroughly typical German recipes, you found the right place. How about this German Lentil Soup or the Beef Roulades to start with? It can hardly get more German than that when it comes to cooking.

The pork hocks or knuckles are probably Bavaria’s signature dish. Not only served for Oktoberfest! The crispy hocks are one of the most ordered foods in restaurants and breweries in the South of Germany. If you ever visit Munich, make sure you have them, you will be in for a treat! And get some Obatzda with Pretzel as well while you’re at it!

The typical Bavarian way of cooking hocks is to first boil them and then to bake them in the oven. This procedure ensures that the meat will get as tender as it can be. The final broiling makes the crackling crispy.

What do you need for cooking German hocks?

Where to find these cuts of meat?

Spices: bay leaves, cloves, juniper berries, caraway seeds, black peppercorns, salt. If all you have are peppercorns, bay leaves and salt is fine as well. But the rest of the spices are nice to use. Caraway seeds are traditionally used when cooking a German pork knuckle.

Beer: German beer is perfect but regular beer is fine as well, you don’t have to buy pricey export beer if you don’t want to.

The recipe is super simple, but it requires three different steps of cooking: boil, roast, broil! But except moving the hocks from one pot to another and turning on the oven and the broiler, there is not very much you have to do.

Can I make this in advance?

After the initial boiling time, you can stop. Remove the hocks from the broth, let them cool and keep them in the fridge. Roast and broil the next day.

Or you can boil and roast the knuckles on day one, cool and keep them in the fridge until ready to serve. Reheat them in the oven very well, turn on the broiler and crisp the skin.

What to do with the leftover broth?

How to serve pork hocks?

Reheat the meat chunks in the oven or in the pan. The skin will not be so crispy anymore, but it will still taste delicious.

You can mix the shredded meat with cooked spätzle or pasta and any leftover pan juices you might have. If you served the meat with sauerkraut or cooked red cabbage, you could mix the leftovers with the noodles as well. This combo makes another mouthwatering and filling main meal.

Create a fusion meal. Stuff pita bread or fill tortillas with leftover shredded meat. Add some onions, feta, tomatoes, cucumbers in the pita. Or some avocado, cheese, chili, sour cream in the tortillas. 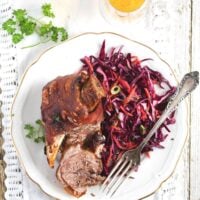 Hey would you mind sharing that red cabbage salad recipe? I want something more fresh and crunchy. It looks great!

Hi Chris. Shred about 1 lb (450 g) red cabbage, two large carrots, and slice 2-3 green onions. Mix them in a bowl and add the dressing. Dressing: Mix the juice of 2 oranges and 1 lemon, 1 tablespoon of good balsamic vinegar, 1 teaspoon of Dijon mustard, fine sea salt, and black pepper. Add 2-3 tablespoons olive oil and whisk until slightly emulsified. Add more salt and pepper to taste. If necessary, add a pinch of sugar; it depends on the acidity of the oranges and the vinegar.